This has been in the news a lot lately, and my main post isn’t anywhere near ready, so here’s a brief overview for now.

LAX has a problem. World class cities bring high quality transportation right into their airport. Twenty years ago, we missed out on the opportunity to do that. We have a chance to get things right now, and we should take advantage of it. 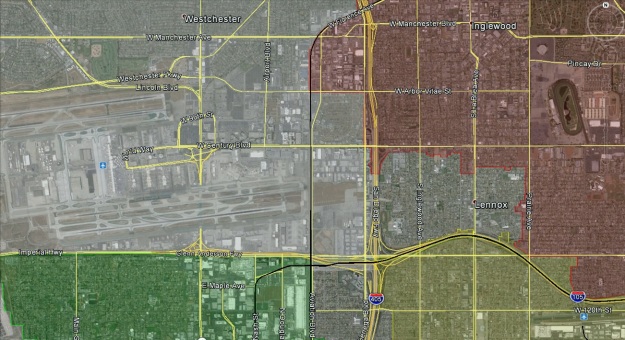 I’m talking, of course, about how most cities have freeways leading right into the airport, and the mistake we made in 1990 by not bringing the 105 directly into LAX. Wait, did you think I was talking about the Green Line?

LAWA has expressed skepticism in the utility of an LRT line to the airport, leading Jarrett Walker to question their treatment of their customers. But really, aren’t LAWA’s customers the airlines who pay terminal fees? And the airlines don’t see it helping attract their customers.

Airport transit, as I’ve said before, is one of those things politicians love, but doesn’t always make sense if you look under the hood. In the case of LAX, bringing LRT directly to the terminals will be very costly and result in terrible route geometry. With a price tag of as much as $3 billion, we could do much better by providing more FlyAway routes and service. Meanwhile, current LA transit users have a median income of $14k (bus) to $28k (rail). How much flying are those folks doing? LA pols should follow Stephen Smith’s advice to Bill de Blasio – build transit for those people, not globe-trotters.

While airport transit can be important because airports are also major employment centers, LAX area employees have been pretty much ignored in the discussion. It’s all about impressing tourists, business travelers, and pop urbanists like Taras Grescoe who automatically assume the project is worth building without worrying about details like cost or operations. And given the choice, I’ll take improvements for ordinary Angelenos every time.

There is a much better alternative for rail service to LAX: a Sepulveda/Century stop on a future line that roughly parallels the 405. I’ll have more on that soon.