This is way off topic, but back in March when the new Census population estimates came out, I tweeted about slow growth in Alabama and negative growth in Mississippi. I’m wondering why they aren’t part of the “new south”, generally taken to be fast growing Sunbelt cities like Charlotte and Atlanta. Why does Atlanta boom, but Jackson doesn’t? Many of the responses boiled down to “because it’s Mississippi” which is sort of circular logic.

I thought it would be interesting to compare population growth since 1860 in four southern cities: Jackson MS, Birmingham AL, Atlanta GA, and Charlotte NC. Since municipal boundaries in the US are illogical, often changing, and hard to trace, I’m using county level data, comparing the populations, based on the 2015 definitions of the metropolitan statistical area (MSA) for each city.

I also added an “Atlanta Redux” where I threw out the 9 counties (out of 29) in the Atlanta MSA that still, as of 2016, have not reached population 30,000. These counties are way out near the edge of the city and were only recently sprawled into the Atlanta MSA. Their inclusion in the regional population back to 1860 probably unfairly inflates Atlanta’s size at the outset of the Civil War, when counties 40 miles out would not have had much plausible connection to the city but still had some population. I’m including both the full MSA and the reduced version to let readers compare. 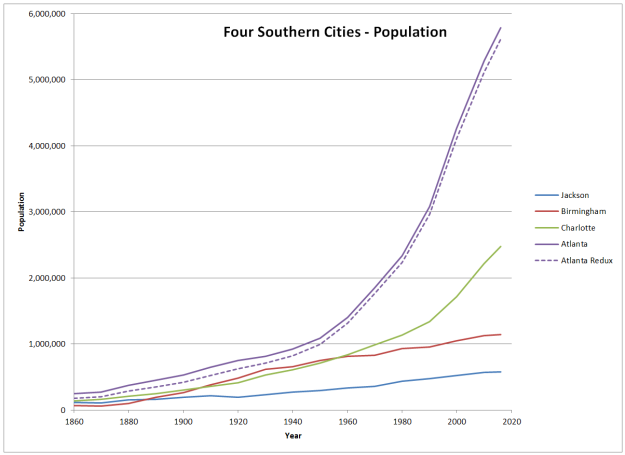 Even the redux version of Atlanta was the biggest city of the four in 1860. Not much divergence is seen between Birmingham, Atlanta, and Charlotte until after World War 2. Jackson appears to have always grown more slowly, though this fate would not have been at all obvious to an observer in 1880, when Jackson was over 50% larger than Birmingham.

Plotting the population on a logarithmic scale can help us see patterns more easily, as the runaway growth of Atlanta makes the others look flat by comparison.

Plotted this way, the post-World War 2 growth of Atlanta and Charlotte doesn’t look unusual; it just looks like a continuation of previous trends. Atlanta, especially the redux version, starts growing a little faster than Charlotte after the war.

More interesting is Birmingham, which grew very quickly for decades after the Civil War, going from about 60% of Jackson’s size in 1870 to 120% of it in 1890. Birmingham even passed Charlotte for a few decades, going from 40% of its size in 1870 to larger by 1910. An observer in 1930 might have expected Birmingham to surpass Atlanta in another 10-20 years, especially the redux Atlanta. Jackson, meanwhile, experienced a strong decade from 1870-1880, but never grew very quickly again. 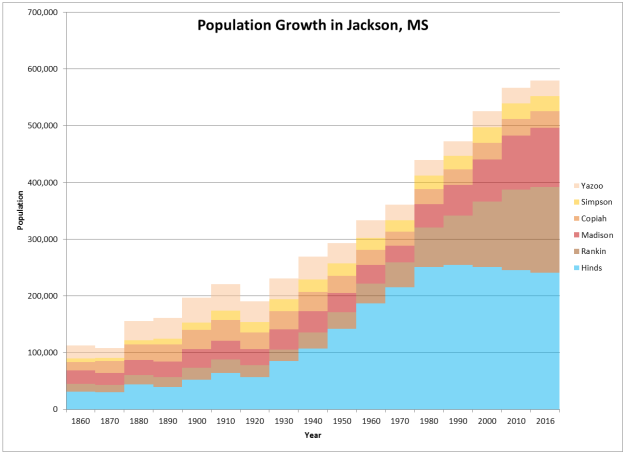 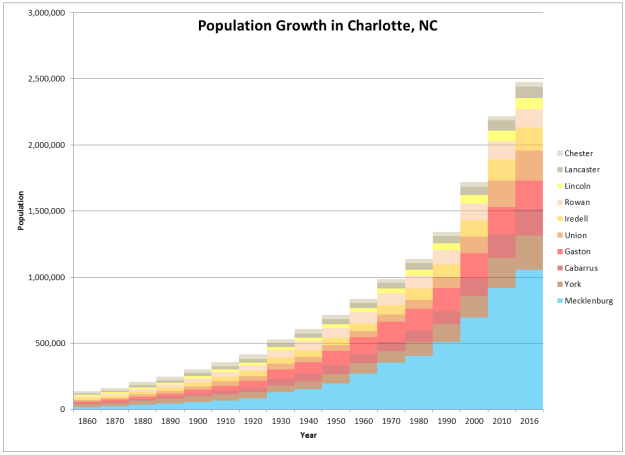 One unappealing answer is that there is simply a great deal of luck in these outcomes. Obviously it helps for the city to be well run, but there are many factors making a complex result, and sometimes you just get bad luck. This rudimentary look is obviously not enough to tell us much about why these cities grew at different rates, but if anyone has any ideas, I’d love to hear them.