Over at Market Urbanism, Emily Washington writes about the need for low quality housing, attributing some of the high cost of housing in US cities to building codes that increase construction costs. Some provisions of building codes were encouraged by social reformers and reflect middle-class standards and expectations, rather than necessities of health and safety.

Over at Rooflines, Jamaal Green responds that there is no shortage of low quality housing in the US. Anyone with a cursory familiarity with the lower end of the US housing market can vouch for the fact that there are many dwellings out there, in cheap cities and expensive ones alike, that are very low quality in their ability to provide shelter, keep out pests, supply functioning water and sewer connections, and so on.

As Paul Groth details in Living Downtown: The History of Residential Hotels in the United States, it is clear that many zoning and building code provisions reflect the middle-class sensibilities of Progressive Era reformers. In particular, living arrangements that were not centered on family life, such as residential hotels and rooming houses, were nearly driven out of existence. Unlike the lower end single-room cubicles of Groth and the doss houses of Jacob Riis, this was not due to public health, but to the perceived impact on social relations of residents. Turn of the century hotels and rooming houses made it possible for women to live alone and for both men and women to engage in intimate relationships, straight or gay, outside of marriage, behavior which was viewed as deviant by many reformers of the time.

It’s reasonable to think that building codes have an impact on the cost of construction. An 1870 pre-law tenement was basically a shell – no electricity, no gas, no running water, no indoor plumbing, no insulation. You could build a tenement pretty cheaply today, if you wanted to. However, code requirements have been phased in over time, and technology drives down the cost of construction. The cheapest new single-family construction today is nearly the same cost per square foot as a Levitt house, but the former is a much higher quality product.

It’s also beyond a doubt that tenements were terrible places to live. The most basic requirements – city water to each unit, indoor plumbing and city sewer service, gas and electricity – are requirements for survival and public health. The oral histories at New York’s Tenement Museum and of the Lower East Side represent people who lived in tenements after these basic amenities had been forced upon landlords by building codes. However, by 1932, Harry Shulman would write in Slums of New York that some tenement owners were making improvements of their own accord, because transportation improvements like the subway had made it possible for renters to find newer, better housing in other parts of the city.

This last bit is perhaps a clue into our situation today. There is lots of low quality housing in the US, but virtually none of it is newly built like the new law tenements were. I’m not sure about this, but the distinction between what can be constructed new and what has filtered down from old construction may be important. (Good transportation to places where new affordable housing has been built is also important, but not central to this discussion.)

The breakeven price for new, code-compliant construction sets an upper bound on what rents can be charged for older construction. If there is abundant new construction, rents for units in new buildings will be driven down to the breakeven price. Would that reduce the portion of the population subject to living in substandard conditions? If you can rent in a new building for the same price, your landlord can’t coerce you into accepting deficient conditions.

There should also be a breakeven price for maintaining old buildings; below that level (and perhaps above sometimes) landlords let the properties deteriorate and rent to progressively poorer tenants, until selling the building.

For the breakeven price for old buildings, zoning and building codes should again both have an effect. Older buildings might be able to generate self-sustaining rents if allowed to be converted to smaller units, such as rooming houses. It might be less costly to comply with better building codes, reducing the breakeven price. Many code officials can tell you stories about having to order the demolition of well-constructed but unpermitted units for non-compliance, turning the occupants out onto the streets.

Zoning codes are probably the larger factor in housing costs. However, while we shouldn’t change any building code requirements that truly affect health and safety, it’s still worth seeing what can be done on that side as well. Though never eliminating the need for good code enforcement, relaxed zoning and better building codes should lower the price of new construction, making it harder for owners of old buildings to pressure tenants into accepting unsafe conditions.

Via The Taupe Avenger, The Truth About Cars wonders if middle-class families can’t afford new cars anymore. (Warning: the author of that piece strongly insinuates the problems are Obamacare and immigrants. Which, no.)

Note that the 2016 Camry and Civic are better cars the 1989 models. They are safer and more fuel efficient. So even if it feels like the middle class can’t afford new cars, it seems like that’s not actually the case. Incomes haven’t gone up very much, but the real price of a basic new car hasn’t gone up very much either.

Leave aside that this rough analysis is based on median incomes, which ignores changes in income distribution that would make new cars affordable to a smaller number of people. (If the middle class shrinks while the high-income and low-income classes grow, the median will stay the same but a larger number of people will be unable to afford a new car.) What’s going on here?

My guess is that people feel poorer because of the Big 3 items whose real costs really have increased greatly since the 1980s – housing, health care, and education. And in fact, the article unwittingly suggests this is true.

We could say the same for health care – the article complains about Obamacare but of course the real problem is that health care costs in the US have grown faster than wages and inflation, and faster than the rest of the world, for decades. Likewise for education.

The increase in cost of housing, health care, and education probably explains most of the squeeze put on ordinary Americans over the last 25 years. Sometimes people realize this; sometimes they focus on the cost of something else like cars or gas. Unfortunately, even when people realize the costs of the Big 3 are the issue, they often blame the wrong thing – Hispanic immigrants, Obamacare, Chinese property buyers, Chinese factory workers, Chinese college students.

It’s easy to scapegoat, and convenient for the people who do not want to do anything to solve the problems of housing, health care, and education costs. The real sources of the problems are more complex. But they are of our making, and that means we can solve them, if we want to.

Somehow, it’s already April, and despite intense media hype and warning, SoCal residents have watched storm after storm deliver rain to northern California but die on the way past Point Conception. The storms that have made it to LA have been mediocre, with limited moisture; the remnants of a tropical storm in September brought more rain than any system since. Through the end of March, this year has been no better for LA than the last four drought years. 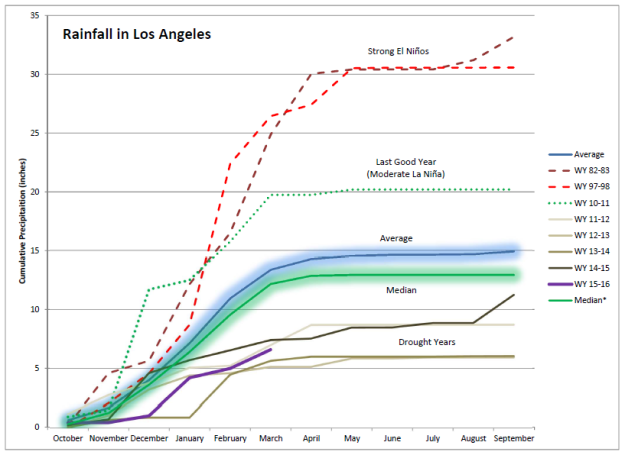 If El Niño is going to bring any rain to SoCal, this is the eleventh hour. The April through June period has brought over 5” of rain only 5 times since 1877 (including the 1982-1983 El Niño), and even this amount would leave LA well below normal for the year.

Major water supply reservoirs in northern California have continued to fill up. The biggest reservoirs in the state, Lake Shasta and Lake Oroville, will almost certainly fill to capacity this spring, after starting out the water year about 30% full. Folsom Lake and Bullards Bar will likely fill, and other large reservoirs like Trinity Lake, Don Pedro Lake, and Millerton Lake have risen significantly. 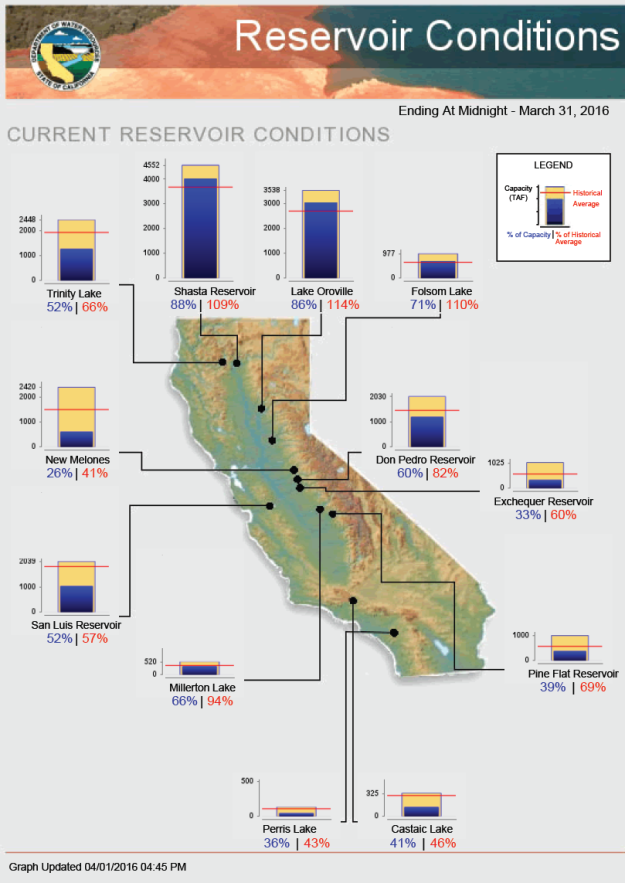 The snowpack in the northern and central part of the state is running close to average, and about 75% of average in the south Sierra, which will keep water flowing into reservoirs through the spring.

The situation in SoCal, though, is dire. While urban areas in LA and San Diego draw water from all across the southwest, the Central Coast is much more dependent on local supplies, with only small State Water Project allocations of NorCal water. Lake Cachuma, in Santa Barbara County, has fallen every year since 2011 and this year was no different. Nearly at capacity in 2011, it currently sits at only 14% full.

Urban water supplies are one thing; we humans will figure out a way to get by. The impact of this fifth dry year on SoCal’s environment is going to be depressing. Wildlife will have tough times finding water. There are going to be a lot of dead trees in the hills and mountains, increasing the fire danger. At this point, all we can do is hope for monsoon moisture and tropical storm remnants to somehow find their way to LA this summer. At least it would do something to help stop forests from drying out. 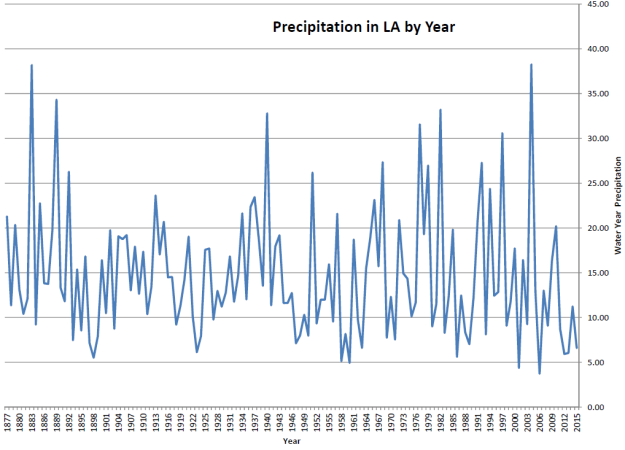 The 1958-1964 period is particularly illuminating. Monthly totals are presented below.

In that 6-year period, LA had 5 years that were every bit as bad as the last 5 years have been – worse, actually – split up by one year of above average precipitation in 1961-1962, with 18.71”. That year would have been below average if not for one monster month, February 1962, which recorded 11.57”, more than any other year in the period and more than the driest 2 years combined.

Precipitation in SoCal is of the ultimate capriciousness, even without humanity running an uncontrolled experiment in geoengineering. Storms struggle to bring rain until conditions are just right, and then the skies open like a breached dam. Hating on California’s water supply system is a popular pastime in much of the country, but it’s exactly the logical thing for a civilization to build in a place like SoCal. LA’s water comes from local supplies, the East Sierra via the LA Aqueduct, northern California via the State Water Project, and Wyoming-Colorado-Utah-New Mexico via the Colorado River Aqueduct. Properly managed, it’s a robust system that ensures reliable supply, and makes much more sense than trying to depend on wildly erratic local precipitation.

(Note: data at left is for LAX, so it doesn’t match monthly totals above. All other data in this post is for downtown LA.)

Looking even longer-term, at decade-long totals, we can see that the last 10 years have been unusually dry, averaging just over 10” of rain a year, the lowest since 1877. However, the 20-year, 30-year, and 50-year trends are unremarkable.

Fortunately, people who know much more about California’s climate have been doing much more detailed research on long-term trends than the armchair analysis above.

Recent research published by Daniel Swain, who writes the excellent California Weather Blog, finds that weather patterns that cause dry years in California are becoming more frequent. However, this does not appear to be at the expense of patterns that cause wet years, which may also be increasing in frequency. The result is that long-term precipitation averages may stay the same, even as global warming causes temperatures to increase, but California’s wet and dry extremes may become even more pronounced.

If long-term trends are leading toward even move variability in California’s water supplies, it heightens the importance of improving water storage and management. If there’s a silver lining to the persistence of SoCal’s drought this year, maybe it will be a continued focus on tackling these challenges.