Indignation at luxury housing construction is one of the few things that unite NIMBYs and renters advocates concerned about gentrification and displacement. Since luxury construction is the only thing that pencils out in many places under existing zoning, this alliance is much more beneficial to NIMBYs, who get to thwart all new construction, than to renters advocates, whose meager gains from avoiding rent increases due to amenity effects are at least partially wiped out by rent increases due to the regional housing supply shortage. Politically, breaking the alliance between NIMBYs and renters advocates is prerequisite to taking any meaningful action on the housing crisis, as these are the two of the largest advocacy groups active in land use policy.

For this story to be accurate, you’d have to believe that the economy is churning out housing as fast as possible. This is extremely unlikely. To see why, let’s look at a few graphs from the always excellent Calculated Risk and from FRED, the excellent data service of the St Louis Federal Reserve Bank.

First, here is the level of housing starts in the US.

Nine years after the bottom fell out of subprime lending, both total housing starts and single-family housing starts remain at levels that, since 1968, were previously only seen during recessions. When you adjust for population growth, the level of housing construction is even worse. The graph below shows the number of new housing starts per year for each person of population growth. For decades, we constructed 0.6 to 0.8 housing units for every additional person. That number dropped to almost 0.2 during the crash and has barely recovered to 0.4. (Note that this ignores demolitions, so it systematically overstates the amount of construction per person, but it’s fine for purposes of comparison.)

Now, it could be possible that developers have decided to spend the same amount of money, but build a smaller number of bigger, more luxurious units instead of a larger number of smaller, more affordable units. If this were the case, we’d expect to see housing investment remain at the same level as in the past, despite declining numbers of units.

This isn’t the case either. The graph below shows total real private investment in multi-family and single-family structures. Residential construction spending remains about a third below what it was before the housing boom of the 2000s started, and half of what it was at the peak.

So, developers are not substituting luxury construction for low-income and middle class construction. It’s just that the total volume of housing investment and construction remains low.

Labor shortages and material costs have been suggested as reasons that housing construction is not higher. However, construction employment is still well below what it was during the last boom.

In addition, employment per housing unit constructed is still above historical averages. Through the 1980s and 1990s, each housing unit built every year supported between 0.4 and 0.5 jobs. This level rose dramatically during the recession, as builders tried to keep their employees despite reduced volume, and has only declined to just over 0.6 jobs per unit. It seems that builders may not be using the labor they have to its full productivity.

Prices for materials like framing lumber are up, but still below what they were during the last housing boom. 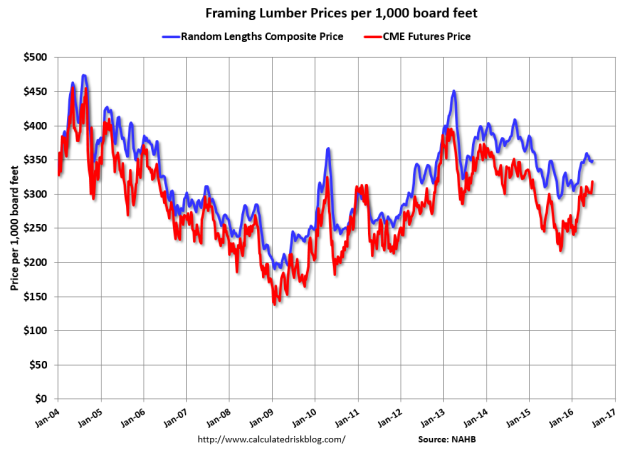 Simply put, luxury construction is not behind the housing crisis. It is the low overall volume of construction. Indeed, even if developers switched to building the same number of middle class units, we shouldn’t expect any impact on the regional price level, because the housing shortage would persist. Rich people don’t disappear because you stopped an upscale tower. Luxury construction doesn’t induce rich people into existence.

What has happened is that job growth has been concentrated in large cities in this economic cycle, more so than in previous expansions. These are places like LA, where geography has made it impractical for new single-family construction on the edges of the region, like the IE, to relieve housing demand generated by job growth in the core, like the Westside.

So if we want to understand the housing crisis, we have to look at why the volume of construction in places like LA is so low – lower than at times in the past like the 1960s and 1980s, despite much stronger price support.

The biggest reason at the local level is zoning. Through downzonings that have restricted how many units can be built on a lot and costly regulatory requirements like parking minimums and impact fees, we have made it impossible to build things like dingbats and courtyard apartments, the types of new housing that were immediately affordable to the middle class and even many low-income residents. Filtering is real, but we should make it possible again to build new construction that’s affordable to low-income and middle class people.

Other policy changes besides zoning reform could work to serve this goal. For example, it’s easy to get a highly-leveraged federally guaranteed loan to buy a single-family house, but not to build a small apartment building or mixed-use project. This is true despite the fact that apartments in centrally located parts of the region are much safer investments than single-family houses on the fringe. If policy had not been oriented this way in the 2000s, perhaps the housing boom would have produced a large number of conveniently located apartments instead of empty subdivisions in the desert. As another example, the much-maligned investment of foreign money in US real estate could be guided towards building apartments rather than pied-a-terre purchases.

NIMBYs, of course, don’t want to see any of this. It’s easy to get mad about rich people buying big houses and luxury condos, and NIMBYs exploit that to their advantage in trying to stop all new construction. To solve the housing crisis, though, we need to realize that luxury construction is a distraction from what we need to do – figure out why housing construction is at such historically low levels, and changing policy to fix it.

Over in VC-land, we are told that autonomy will change traffic in cities from circuit switched to packet switched and from TDMA to CDMA. We will take this to mean that (a) riders may use several vehicles over the course of a trip and (b) several riders and several uses (passenger, freight) may use a vehicle for portions of a trip as the vehicle travels between two points. The alternative interpretation, that different portions of vehicles will be sent via different routes and different vehicles will simultaneously occupy the same space on the road, would be a bit too fantastical.

Astute readers have no doubt noted that we already have packet-switched CDMA transportation in cities: fixed-route transit service, where people board and alight at many points along the vehicle’s route, and users may be forced to transfer one or more times between different vehicles to reach their destination.

Looking past the annoyance of everything being turned into tech jargon, this is worrying because it is nothing more than a tech industry reframing of the mistaken “water through a pipe” philosophy of early traffic engineers. The idea that human users can be routed through a transportation network like packets of data across a communications network is akin to the idea that drivers move through a transportation network like water through a pipe. Understanding the human factor is one of the hardest learned lessons of traffic engineering, indeed, something many engineers still struggle to do.

People do not act like water in a pipe or packets of information on a network. Transfer penalties are real and vary with the person, the weather, the trip purpose, and other factors. Many people are not willing to share a ride with one anonymous person – note that the practice of “slugging” arose where HOV restrictions required three people rather than just two.

It is also not certain that ride sharing will replace single occupancy vehicles as autonomous vehicles become more prevalent. None other than Randal O’Toole provides some reasons why: people like having their own car with their own stuff in it, people don’t like the idea of a stranger using their personal property, and if autonomous vehicles reduce the cost and annoyance of car ownership, more people may choose to own. You’d be crazy to pay to keep a car in Manhattan & drive it around, but what if you could have the car drive you around and then go park itself in New Jersey when you don’t need it?

Another example of ignoring human factors is some presentations of automated intersections. For this to work, if pedestrians and bikes are to be permitted at all, they would have to behave in a perfectly predictable manner. Of course, we don’t – we stop to take out our phones, we stop to look at things, bike chains slip off gears. If full automation and vehicle-to-infrastructure communication are achieved, these intersections could prove useful for junctions of limited access facilities, but they won’t be popping up in cities. (And they will likely be more conservative than presented in these simulations, due to the need to allow for mechanical failures, unexpected pavement conditions, and so on, but that’s another issue.)

I don’t mean to suggest that autonomous cars won’t have any impact on cities. The improvements to safety alone from eliminating human error, inattention, and bad behavior will be well worth it. But if you’re waiting for the paradigm shift of changes being hyped in some of the press, I wouldn’t hold my breath.