One of the more nefarious impediments to housing construction in California, in my opinion, is the proliferation of impact fees on new development. Impact fees first became widespread in the 1980s, a consequence of Prop 13 bankrupting local governments’ ability to pay for public improvements like parks and schools. The state allowed cities and counties to start charging community district fees, also known as Mello-Roos fees, whereby each unit in a new subdivision pays a fixed amount to cover the construction of new public facilities. These fees only apply to new construction in a particular district.

Other development impact fees, charged on all new construction in a city regardless of location, have also been expanding. For example, the City of LA charges a park (or Quimby) fee on all new construction to pay for new parks in the city, and recently enacted an affordable housing linkage fee, where all new construction pays into the city’s affordable housing fund. Impact fees are popular among conservatives and progressives alike, the former because it keeps taxes lower on a majority of voters, and the latter because it symbolically punishes people that progressives don’t like, such as developers and the people who can afford new housing.

Unfortunately, impact fees are bad. They are a regressive and inefficient way of funding improvements, and they unintentionally hurt many people as a result. People who support progressive outcomes should oppose impact fees and support general broad-based taxes instead. Let’s take a closer look at why.

Impact fees often form a large portion of the cost of new housing. For example, a recent study of impact fees found that some cities, such as Irvine and Fremont, have impact fees of over $60,000 per multi-family unit. That translates to about $450/month in higher rent  — just to pay for impact fees.

Progressives tend to not care about this, because they view these taxes as falling on big bad developers and on the people rich enough to afford new housing. However, by raising the price of the cheapest new construction, it enables landlords to raise rents to higher levels without any competition from new construction. Since the vast majority of housing is existing units, and there are relatively new units, impact fees are in effect taxes on renters for the primary benefit of landlords. 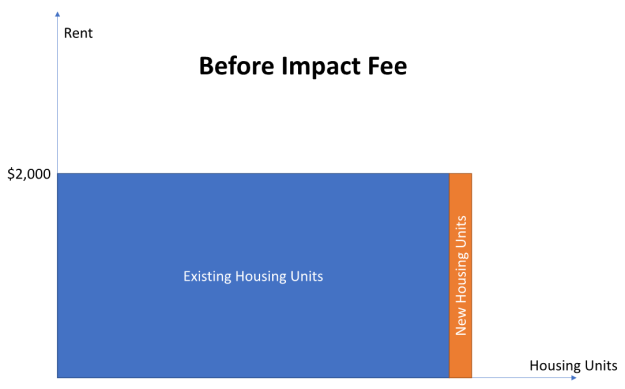 Now, let’s impose a $20,000/unit affordable housing impact fee on new construction. The cheapest new construction will rent for now is about $2,150/month. That allows landlords to raise the price for existing units to the same level. The net effect is that we raise $4,000,000/year for affordable housing construction (enough for about 8 units at California prices) and we increase landlord profits by $18,000,000/year ($150/month x 10,000 units * 12 months/year). So our “impact fee” is really a 7.5% tax on renters, and we give over 80% of the revenues generated to landlords. Is this really what we wanted to do?

Of course, having made it clear that the cost is actually being paid for by renters, the next logical question is why we should be taxing housing in this way at all. Now, this model is clearly an oversimplification; dynamic effects are hard to predict, but it stands to reason that at least some of the cost will effectively be paid for by people selling land, since higher costs of new construction will make people less likely to build new housing, lowering the demand for land. And taxing all units does not lead to the perverse outcome of rewarding landlords for doing nothing.

But it is still logical to conclude that if you increase taxes on new housing, the cost of housing will rise. It is not revolutionary economics to say that if you want more of something, you shouldn’t tax it. Increasing the cost of new housing during a severe housing shortage is just poor policy.

Really, tying taxes or fees for public improvements to new construction in this way is not progressive at all. There’s no reason funding for affordable housing has to come from anything to do with development. The progressive way to do it would be to tax things that are bad and use the revenues to fund things that are good. A carbon tax whose revenues are used to develop affordable housing would be great. So would a congestion tax used to develop affordable housing. A broad property tax that applies to everyone would also be fine. But impact fees should be avoided if possible, unless the goal is increasing landlord profits.