This question has been bothering me for a while. The momentum behind current plans is so large that it’s probably just a philosophical question, but I still think it’s worth examining in detail both for LA to think about what we’re trying to do and as a case study for other cities that might be considering transit investments.

A fair amount of money has already been invested in improving transit at Union Station, including the Red Line, the Gold Line, the bus plaza, the Silver Line, and Metrolink. An even larger amount of money is planned to be spent soon, including run-through tracks for Metrolink and Amtrak, high speed rail, the Union Station Master Plan, and other potential investments like the north end of the West Santa Ana Corridor.

There’s just one problem: Union Station is in the wrong place. By the time Union Station opened in 1939, downtown LA’s center of gravity had already shifted south to the Spring St Financial District. Various redevelopment schemes have tried to pull it north – notably, the development of the Civic Center (roughly bounded by the 101, Los Angeles St, 2nd St, and Figueroa St) in the 1950s and urban renewal on Bunker Hill (roughly bounded by 1st St, Hill St, 5th St, and the 110) from the 1960s through the 1980s. However, these schemes have also moved downtown’s center west, away from Union Station.

It’s also worth remembering the reason Union Station was already in the wrong place when it opened: part of the scheme was a racist plan to demolish a low-income Chinese immigrant neighborhood. The station replaced terminals operated by the ATSF Railroad at 2nd & Santa Fe and by the SP Railroad at 5th & Central. These were also inconvenient locations relative to LA’s central business district (CBD), but no less so than the current location, and the SP’s location was arguably more convenient to the Spring St Financial District.

Today, downtown’s centers of activity continue to move and south and southeast. The construction of LA Live and expansion of the convention center has made Figueroa and Olympic a busy intersection, with many hotels in the area. Residential development is taking place in many parts of downtown, but the most intense development is south of 7th St to about Pico Blvd. The Arts District and Fashion District have emerged as growing office districts despite relatively poor transit access; for example, the City Market development will be well east of the Blue Line and Red Line.

Part of this problem will need to be addressed with better rapid transit to those districts, but with renewed focus on improving Metrolink, it’s worth reviewing the best practices for commuter rail and how Metrolink might better serve downtown’s transit needs.

What Should Commuter Rail Do?

Commuter rail serves longer trips to the CBD than rapid transit, reaching deeper into suburban areas. The best systems compliment the city’s rapid transit network, and do not rely on the rapid transit network to serve last mile trips on the downtown end of the trip. This means that the terminal should be in walking distance of large employment centers downtown. Both in the US and abroad, significant investments have been made to improve commuter rail in this regard:

Viewed this way, LA may be about to embark on a plan to invest a lot of money in upgrading Metrolink and Union Station, without resolving a fundamental weakness: Metrolink relies on the Red/Purple Lines and Regional Connector to make last mile connections downtown. This increases crowding on the rapid transit network, and is an inefficient use of vehicle capacity, with peak loading driven by a large number of passengers who ride the system for only one or two stations.

A plan to increase Metrolink frequency should look at options to resolve this weakness. Fortunately, it does not need to be done at the same time, and could be done in the future if desired, though as time passes the sunk costs of investments in Union Station are going to increase.

The central feature of such a plan would be a tunnel from the Ventura/Antelope Valley Lines north of Union Station through the CBD and connecting to the Orange County/91 Lines somewhere near Redondo Junction. There are many potential route options but the general destinations to be served should include the Civic Center, Bunker Hill, the Financial District, LA Live, and the Fashion District. Five stations would likely be too many, but these destinations can probably be served by three stations.

From Mission Junction, the tunnel would run generally southwest towards the Civic Center, and then follow one of downtown’s north-south arterials. All of them between Figueroa St and Spring St should be analyzed to determine the best option, excluding Flower St and Hill St, where the cost of going parallel and beneath the Regional Connector or Red Line would likely be too high. Figueroa St or Hope St would serve the Financial District and LA Live best, but provide poor connections to the Civic Center and places east of Hill St. The opposite would be true of Broadway and Spring St. Grand Ave or Olive St may prove to be the best; well-placed stations could provide good connectivity to all destinations and the rapid transit network. A Civic Center/Bunker Hill Station between 1st and 2nd could connect to both the Red Line and Regional Connector. A Financial District/LA Live Station between 8th and 9th could provide underground connections to 7th/Metro.

The tunnel would then turn and run southeast to Redondo Jct. The options here are less numerous and may have less appealing trade-offs. Everything between 9th St and Washington Blvd should be studied. 9th St offers the most direct route to Redondo Jct and provides a good location for a Fashion District Station around 9th & San Pedro. However, the further north the turn east is made, the less convenient the route would be for serving LA Live. 11th or 12th St might be a good compromise, as it would allow the turn to be further south while still allowing for a good Fashion District location. The location of the turn might be tricky with all the development going on in the area now. Washington Blvd would make it possible to connect to the Blue Line, and would offer the possibility of grade separating the Blue Line at the same time, but is too far south to adequately serve the Fashion District.

Below are some general concepts that show possible locations for the tunnels and stations. 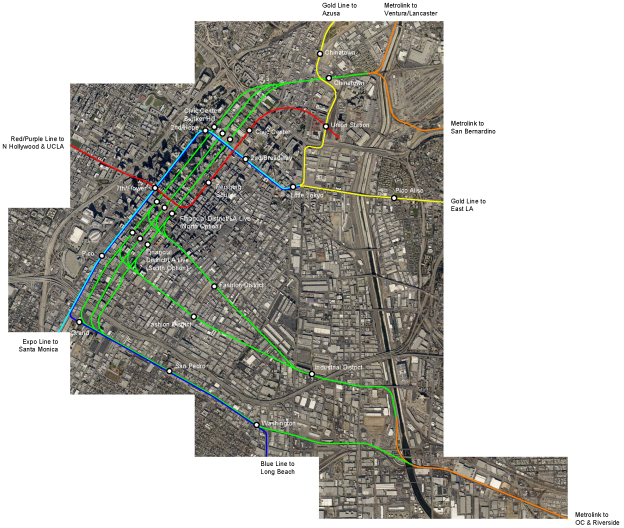 In a future post, I’d like to look at the branches of Metrolink in more detail and discuss what makes sense for each. For now, at least consider the possibility that Union Station may not be the right place for LA to concentrate transit investments.

Per some good comments on the post and Twitter, here’s a revised map, that has the tunnel serve Union Station (a much better plan) and shows the proposed Union Station run through tracks (pink dashed line). Also, here’s a link to a larger version of the original graphic and the revised graphic.

7 thoughts on “Is Union Station Obsolete?”