With WMATA’s unplanned weekday shutdown as the acute trigger and LA Metro’s work on the Red Line & Blue Line as the chronic one, here’s a short take on urban rail and work windows.

Working on any railroad is dangerous. This is especially true of rail transit, which has higher train volumes and more constrained spaces. In tunnels and aerial guideways, there might not be any space at all to clear the tracks other than what’s provided for emergencies. Working on a railroad is also more complex than working on a roadway. Trains can only switch tracks where crossovers are provided. With roadway construction, we can usually close lanes anywhere we want, and lane closures can modified relatively easily.

As a result of these factors, it’s difficult to do construction and maintenance work on urban rail transit systems except when the track in question is completely shut down. This means that agencies are left with two choices: single tracking and full closures. Single tracking, which is what LA Metro has been doing evenings and late nights on the Red Line, means that all trains in both directions share one track through the work zone. Full closure means, well, full closure.

Single tracking lets agencies maintain some level of service, but capacity may be quite low, as you obviously can’t send a train in one direction through a single-tracked section until the train going in the opposite direction has passed. Capital cost decisions made long ago will determine the capacity. For example, the Red Line doesn’t have any crossovers between Union Station and Westlake/MacArthur Park, and there are three stations in between (Civic Center, Pershing Square, 7th/Flower). If it takes 2 minutes including dwell time to travel between stations, it’s about 8 minutes eastbound from Westlake to Union. Allow 3 minutes at Union for turnaround and 8 minutes westbound from Union to Westlake, and there’s your 20 minute late-night headway. Published schedules say 7 minutes, but I think it’s reasonable to add a little extra to account for passenger confusion with trains sharing one track. Note that if one train shows up late, following trains will have to be held, adding to unreliability. To improve on this, costly capital improvements to add more crossovers in underground tunnels would be needed.

Single tracking also reduces the efficiency of the work being performed. It limits workers to one section of track, making it more difficult to perform concurrent work or sequential tasks, as it’s difficult to have more than one or two crews working in an area.

Full closures solve these problems, because you don’t have to worry about maintaining service. This is part of why so many systems close down for at least part of the night. However, even with nightly closures, it is difficult to accomplish work efficiently. For example, if the work zone is difficult to reach, a substantial amount of time may be lost to setup and breakdown time. For example, the only way to bring equipment into the Red Line is at the portal by Union Station. If you are working between Universal City and North Hollywood, you have to bring equipment all the way out there from Union, at low speeds.

Because startup and breakdown times are fixed, costs do not scale linearly with the length of the work window, whether it’s single tracking or a full closure. For example if the last train is at 9pm and the first train is at 4am, you have 7 hours. Of that, the first hour will likely be spent waiting for permission to enter, confirming power is shut down, and getting set up. The last hour will likely be lost to breaking down and clearing the track, probably well before 4am to make sure there are no issues. Operations isn’t going to let you plan to get out at 3:59am. This leaves you 5 hours to work.

If the last train is at 11pm, the window gets cut from 7 hours to 5 hours, and effective work time gets cut from 5 hours to 3 hours. Much less work will be accomplished, but labor costs will not necessarily go down; you can’t call someone out to work in the middle of the night and only pay them for 5 hours of time. In addition, the 2 hours of work that you lose are the most effective hours, because construction work tends to get more efficient as workers get more familiar with the site and each other. You lose 2 hours of the worker swinging the hammer but keep the 1 hour of figuring out where it needs to be swung.

Of course, if you’re some smarmy New Yorker who inherited 4-track subway trunk lines, you can close down tracks for long periods of time, like a weekend or weeks, and maintain service 24/7 using the other tracks. Sure, it might be inconvenient to have no express service or to have to use express and ride back on the local, but it’s still service.

However, most cities don’t have 4-track subways. Despite what some people might want you to think, it’s pretty clear that you don’t need a 24/7 subway to be a “world-class” city:

Look, zero late night rail service does not have to mean zero late night transit service. Traffic is minimal between midnight and 5am just about everywhere; there’s no reason that service can’t be provided by buses during those hours. Riders might be better off with more frequent bus service in lieu of very long headways on the rail network to allow single tracking, and it might not be very expensive if it increases the efficiency of construction work. I strongly believe that good 24/7 transit is necessary in large cities, because there are always people that need service. It just doesn’t have to be on steel wheels.

Here’s our third update on ridership on some of the main bus routes in the San Fernando Valley. As a reminder, for north-south corridors, we have San Fernando, Van Nuys, Sepulveda, and Reseda; for east-west, Ventura, Sherman, Roscoe, and Nordhoff.

For more detail on the sausage-making involved in converting routes that cover multiple corridors to a number for a single arterial road, see the first post.

Here’s the raw data. As always, highlighted cells represent top 10 ridership months since January 2009. All routes put up their best months in the 2009-2010 period; this may be due to the recession reducing car ownership.

Here are the 12-month rolling averages for weekdays.

Saturday and Sunday 12-month rolling averages largely reflect weekday trends, as shown below. The only interesting countertrend is an uptick in Reseda over weekends.

The configuration of rapid routes on Van Nuys was changed in late 2014. Route 761, a rapid that went from Van Nuys in the Valley through Sepulveda Pass to UCLA in Westwood, was eliminated. At the same time, Route 734, the Sepulveda rapid, was extended from its previous terminus in Sherman Oaks through Sepulveda Pass to Westwood. Rapid service on Van Nuys was replaced with Route 744, a U-shaped route on Van Nuys, Ventura, and Reseda. An express rapid service, Route 788, serving the northern part of Van Nuys and connecting to the Orange Line, then running express on the 405 to Westwood, was also created. 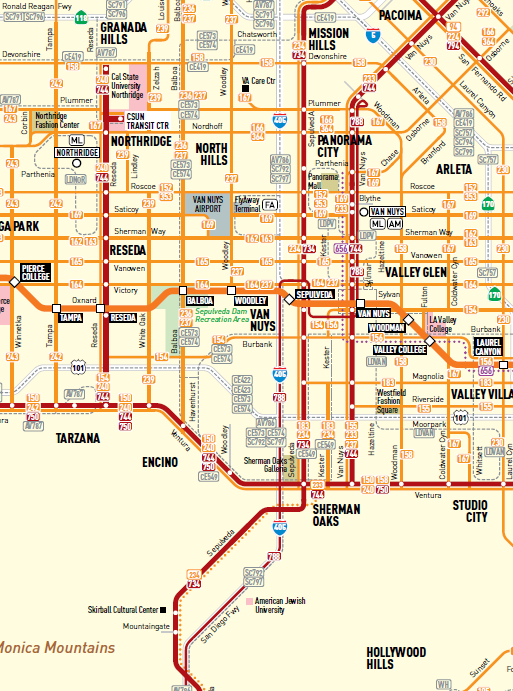 In our last post, we speculated that the change may have had a negative impact on ridership on the Van Nuys corridor. A closer look shows that this is probably not the case for weekday ridership. Here is the breakdown of ridership on Van Nuys and Sepulveda by local and rapid on each corridor, and total local and total rapid on the two corridors combined. 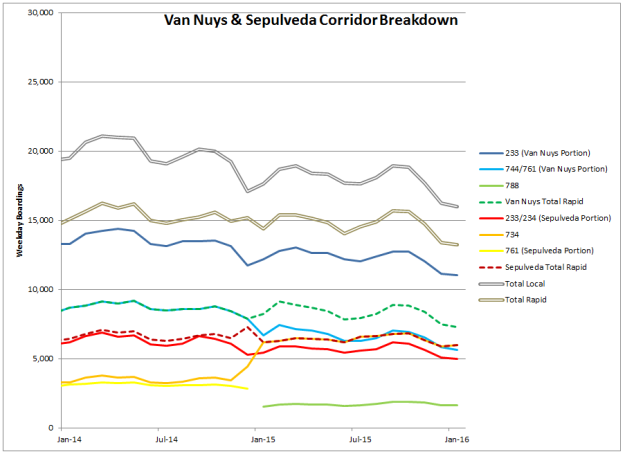 Note that we are using monthly data here, not the rolling 12-month averages, because we want to see the impact of a change to bus service at a discreet point in time, and the rolling averages will obscure that effect.

In stark contrast, the large drop in ridership on the Van Nuys corridor appears to be directly related to the reconfiguration of rapid routes.

While Route 761 ran on weekends, Route 734 never has, and this was not changed when 761 was eliminated. Route 744 runs on weekends, but Route 788 does not; thus on weekends there is now no rapid service from the Valley to the Westside.

Again, we are speculating, but it appears that with the elimination of 761, riders who couldn’t cancel their trips and had no other option to get from the Valley to the Westside shifted to the Sepulveda local route, 234, producing a sudden jump in ridership. However, 744 appears to be less useful to riders than 761 was, because the increase in local ridership was less than the drop in rapid ridership that occurred with the cancelation of 761. The net result is that while total local ridership on Van Nuys and Sepulveda on Saturdays has remained relatively constant, total rapid ridership was reduced by over 50% almost instantly.

This strongly suggests that weekend rapid service between the Valley and the Westside was useful to many riders, and Metro should consider restoring it.