The Ventura Freeway, running from Woodland Hills to Pasadena, is the Valley’s main – only, really, since the 118 is so far north – east-west freeway. In typical LA fashion, much of the Valley is car-oriented despite the paucity of freeway capacity: just one east-west freeway for nearly 2 million people. The freeway is the famous 101 from Woodland Hills to the Hollywood Split, and the much less famous 134 from the Hollywood Split to Pasadena.

The Ventura Freeway is newer than some of LA’s first freeways, like the 110, the 10, and the Hollywood Freeway portion of the 101, so it doesn’t suffer from the problem of short interchange spacing. However, it’s old enough to have underpowered freeway-to-freeway interchanges at the 405, the Hollywood Split, and the 5. Let’s take a closer look at these three interchanges, as usual with an eye on rationalizing the freeway facility and improving the local streets in the vicinity. For this post, we’ll look at the Hollywood Split, saving the 405 and the 5 for another day.

Before diving in, let’s think about what makes a good freeway-to-freeway interchange. First, these interchanges have larger ramp volumes than typical interchanges, which makes the weaving conflicts worse. That suggests an increased need to avoid conflicting local ramps (a local on-ramp right before the freeway off-ramp, or a local off-ramp right after the freeway on-ramp). Second, these interchanges take up more space than typical interchanges. Therefore, in order to maintain functionality for local traffic distribution, it often makes sense to have an interchange serving local traffic integrated somehow. This can take the form of half diamonds or a full diamond interchanged arranged so that its ramps don’t cause any weaving conflicts. I like to call this an “inside interchange”. Here’s an example: the 134 and the 2, with inside diamonds on the 134 at Harvey and the 2 at Holly.

Now, we don’t want to go blowing massive holes in North Hollywood to drop in 65 mph ramps and create interchanges like they have in undeveloped parts of Fontana. However, these principles can still help us figure out what will work for these cases. We’ll do our best to keep improvements within available right-of-way, compromising on speed where needed. Alright, on we go.

On the other hand, the interchange also reflects downtown-oriented design, with the movements to/from downtown emphasized at the expense of other movements. This reflects the thinking of the era, that people would drive to a downtown central business district (CBD) in the morning and out to suburbs in the afternoon. With LA’s polycentric development, downtown is not as dominant as it is in many cities. The Ventura Freeway provides important east-west connectivity to outlying CBDs in Sherman Oaks, Burbank, Glendale, and Pasadena. Thus, if one considers the Ventura Freeway the mainline – an argument for which there is a good case, as we shall see – there are only two through lanes, which is also substandard for this location. The Ventura Freeway through movements stay left at the splits entering the interchange, but merge to the right departing the interchange. This means that depending on which movements dominate, we might make different decisions about what to consider the mainline freeway, and which ramps to reconfigure.

Lastly, looking at the local street ramps, things are actually in pretty good shape. The 170 has a half-diamond to the north, and the 101 has a half diamond to the west. The 134 has a half diamond to the east, though there’s a little friction between the Vineland on-ramp and Cahuenga off-ramp going east. One notable gap is that there’s no on-ramp to the Ventura Freeway west between Pass Ave and Tujunga Ave or Moorpark St, almost 2 miles, so that might be something to try to fix. Going south on the 101, the Vineland Ave off-ramp is uncomfortably close to the 101/170 merge, something we looked at fixing in a post that feels like it was written century ago.

Now, to look at the deficiencies of the interchange, it’s helpful to look at a stylized diagram showing the number of lanes and traffic volumes. Note that the ramps are drawn as simply as possible, ignoring loops and bridges, to make things easier to look at. 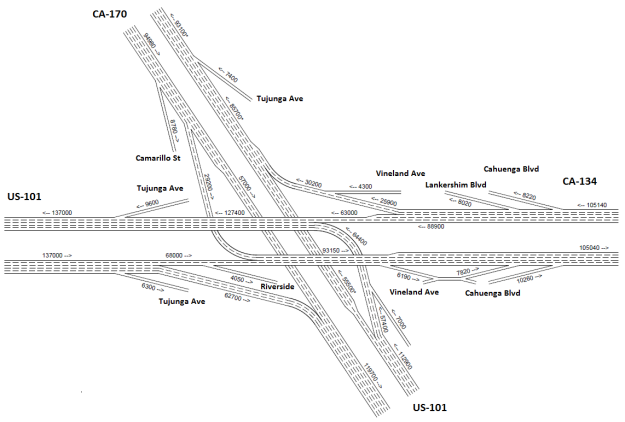 (Note: traffic and ramp volumes from Caltrans. Asterisk indicates volumes I increased by 10,000 to get consistent results.)

For the purposes of this post, let’s do an updated stylized diagram showing a simple solution for this bottleneck, taking the easiest approach. Let’s bump up the ramps between the 101 and the 134 to three lanes each way. Going west on the 134, that means we just get rid of the lane drop and extend the third lane through the interchange, which would be a basic bridge widening project. This would leave us with 6 lanes going north on the 101 instead of 5 lanes; the sixth lane could be dropped at the next off-ramp, Laurel Canyon Blvd.

Coming the other direction, let’s pick up the southbound onramp from Laurel Canyon Blvd to the 101 south as a sixth lane. We can then split and have 3 lanes go to the 101 south and 3 lanes to the 134 east. We eliminate the 134 east offramp to Riverside Drive, which has relatively low volume, and let that traffic be picked up by the Tujunga Ave and Cahuenga off-ramps. That clears space for the bridge widening for the third lane to the 134 east. With 2 lanes merging in from the 170 south, we have 5 lanes on the 134 east. Rather than drop the right lane and add the HOV lane on the left, let’s just turn the left lane into a carpool lane and force ramp traffic from the 170 over, since it has a lower volume anyway. 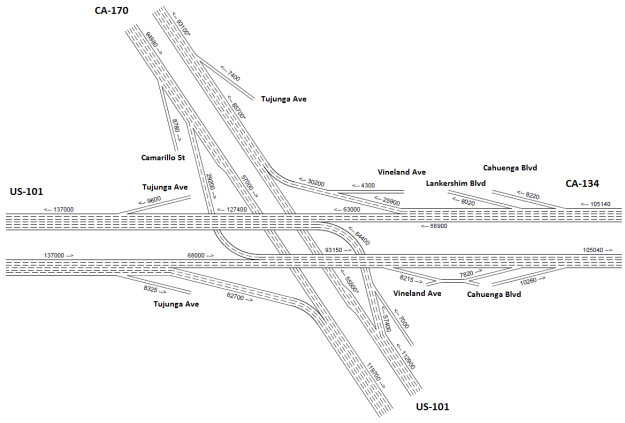 Note that we also cleaned up the 101 north to the 170 north transition, making it 3 lanes instead of 4 lanes and eliminating the need for a lane drop on the ramp from the 134 west to the 170 north. In this instance I left the right-side lane drop and added the HOV lane on the left, but maybe the opposite approach would work.

In a future post, I’ll lay this out on an aerial, and take a deeper look at some of the other possibilities for improvements discussed above.