With everyone so excited about a good rainstorm finally hitting LA, I thought it might be interesting to put this year in perspective with the drought years, the last good rain year (2010-2011, a la niña episode), and previous strong el niños (1997-1998 and 1982-1983). A note to readers outside California: you may have heard that California was getting some good storms in November and December. This was true for northern California, but the storm trajectory was not favorable for places south of the Transverse Ranges. Southern California including LA actually got very little rain and there wasn’t much snow in our mountains, as we’ll see below. For all data here, we’re using the water year defined as October through September (e.g. water year 1997-1998 is October 1997 through September 1998).

Today’s storm should be very beneficial to LA County. We got a decent amount of rain but escaped most of the impacts from heavier downpours. As of 6pm, downtown LA had received 1.61” of rain, falling between 7am and 3pm. There were a few heavy bursts but also some steady moderate rain. Hopefully this allowed more water to soak into the ground than happens with downpours.

Here’s a comparison of rainfall for the aforementioned years.

And here’s cumulative precipitation for these years. 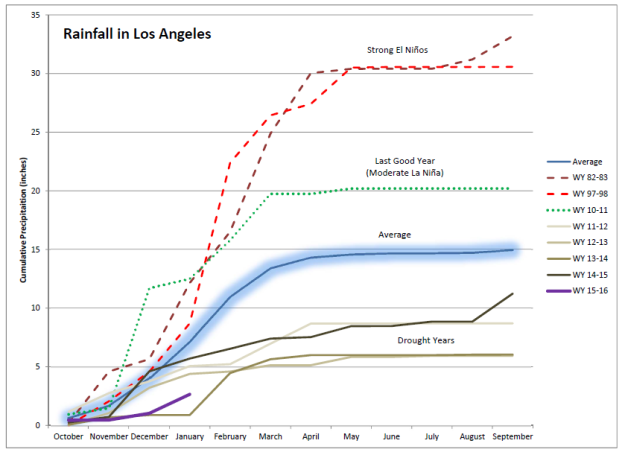 The point isn’t to try to make any predictions about what will happen for the rest of this year. Precipitation in southern California is wildly variable: the driest water year was 2006-2007, with 3.73”, and the wettest water year was 2004-2005 with 38.25”. For the period 1877-2015, every calendar month has been recorded with no rainfall at least five times.

Thanks to a dry fall, this water year is off to a slow start – slower than the drought years, in fact. The difference, of course, is that this year weather patterns have finally shifted to a favorable pattern for southern California. We have already surpassed the January rainfall totals of the drought years; this has already been the wettest January since 2010.

Today’s storm was an appreciated, long-awaited start to the rainy season. Here’s hoping that the storm train keeps on rolling!