Here’s our fourth update on ridership on some of the main bus routes in the San Fernando Valley. As a reminder, for north-south corridors, we have San Fernando, Van Nuys, Sepulveda, and Reseda; for east-west, Ventura, Sherman, Roscoe, and Nordhoff.

For more detail on the sausage-making involved in converting routes that cover multiple corridors to a number for a single arterial road, see the first post.

Here’s the raw data. As always, highlighted cells represent top 10 ridership months since January 2009. All routes put up their best months in the 2009-2010 period; this may be due to the recession reducing car ownership.

Here are the 12-month rolling averages for weekdays. 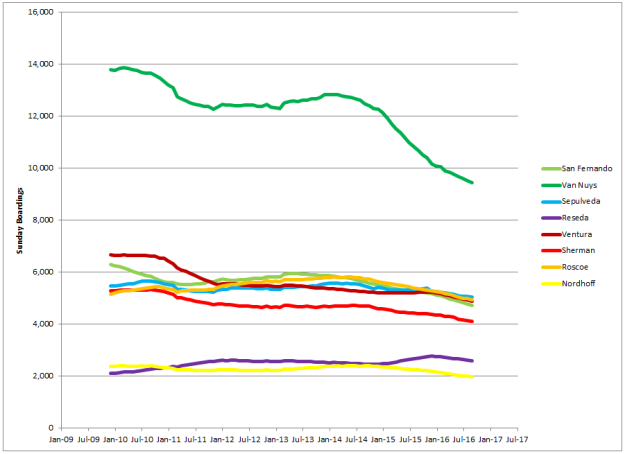 As discussed previously, the configuration of rapid routes on Van Nuys was changed in late 2014. Route 761, a rapid that went from Van Nuys in the Valley through Sepulveda Pass to UCLA in Westwood, was eliminated. At the same time, Route 734, the Sepulveda rapid, was extended from its previous terminus in Sherman Oaks through Sepulveda Pass to Westwood. Rapid service on Van Nuys was replaced with Route 744, a U-shaped route on Van Nuys, Ventura, and Reseda. An express rapid service, Route 788, serving the northern part of Van Nuys and connecting to the Orange Line, then running express on the 405 to Westwood, was also created. 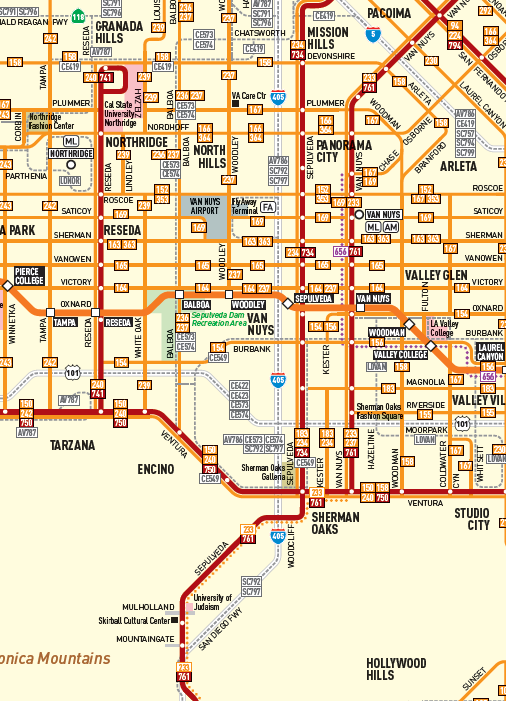 Here is the breakdown of weekday ridership on Van Nuys and Sepulveda by local and rapid on each corridor, and total local and total rapid on the two corridors combined.

Since a longer time has passed, we can now also start to look at the 12-month rolling averages.

The rapid route shuffle seems to have not had much impact on overall ridership trends. Weekday local ridership had already begun to trend down when the shuffle took place.

In contrast, it seems possible that weekend ridership has suffered. While Route 761 ran on weekends, Route 734 never has, and this was not changed when 761 was eliminated. Route 744 runs on weekends, but Route 788 does not; thus on weekends there is now no rapid service from the Valley to the Westside. 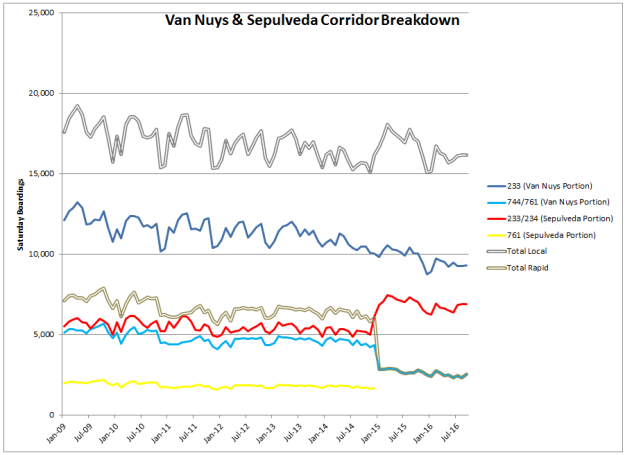 Again, we are speculating, but it appears that with the elimination of 761, riders who couldn’t cancel their trips and had no other option to get from the Valley to the Westside shifted to the Sepulveda local route, 234, producing a sudden jump in ridership. The increase in local ridership was smaller than the drop in rapid ridership, so overall ridership has trended down. However, the background trend has been a decline in ridership, so while possible, it is cannot be said with any certainty that the rapid route shuffle caused a decline.