In a previous post, we looked at county sizes across the US based on their land area. Let’s do a quick follow up and look at county size based on population.

There are 3,142 counties (and county-equivalents) in the US. Because there are many counties with small populations and relatively few counties with very large populations, it makes sense to group them on a logarithmic scale. We’ll look at the number of counties in each of the following population ranges:

The number of counties in each range is shown below. 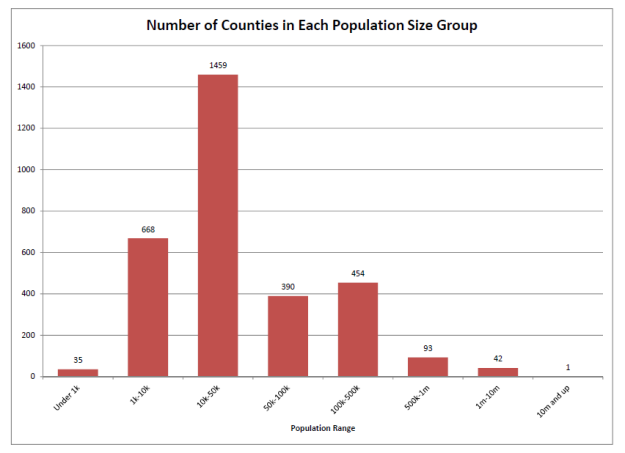 Over two-thirds of counties have population less than 50k, with almost half of all counties in the US falling into the 10k-50k range. There are 42 counties with 1m-10m people, and of course, one unique county with over 10m 😉

Some other interesting data points on county sizes:

Here’s the breakdown by how many people live in each range, along with the population change for each range from 2010 to 2014:

The striking thing here is the difference in population growth. Counties under 50k people shrank, and counties in the 50k-100k grew slowly, at 1.29%. Population growth was much stronger in counties above 100k people. Even LA County, with its high housing costs and large population base, grew at almost 3%, just below the national growth rate of 3.07%. The fastest growth was in the 1m-10m range, followed by the 500k-1m range.

I wanted to investigate in a little more detail, so for each population range, I sorted counties by growth rates. The table below shows the results

This stark difference between small counties and large counties reflects recent trends in the US of large metropolitan areas gaining population while rural areas and small cities struggle or decline.

The US is a big place, and it would foolhardy to try to come up with overarching reasons. Different regions struggle for different reasons: rural counties in the High Plains have been shrinking for decades due to the inherent difficulty of dryland farming, small industrial cities have not been able to renew themselves the same way larger cities did, and coal mining counties in places like West Virginia have been hammered by low coal prices.

At a macro level, no one really knows how to create local economic prosperity in these places. Many people expected better communications technology (the internet) to make small cities and rural areas more connected, making it easier for people to work remotely and spread prosperity. That hasn’t happened. Why is anyone’s guess. For now, the important thing for those of us in large counties is to support policies that allow the creation of more housing, to allow people from small cities and rural areas to be able to move to places where they have more opportunities.