Recently, we took a look at an opportunity to improve access to the LA River and create space for building a bunch of badly needed housing by eliminating some ramps on the 2 that were probably causing freeway congestion anyway.

There’s another set of ramps on the other side of Eagle Rock that could go, and while eliminating them wouldn’t do much for the freeway (which is rarely congested there anyway), it’s perhaps an even better development opportunity. If you know the area at all, you’ve already guessed that we’re talking about the long ramps from Colorado to the 134. As Walk Eagle Rock explained, these ramps are leftovers from an early interim terminus of the 134, when the state planned to run the freeway through Eagle Rock rather than the through the hills above it. 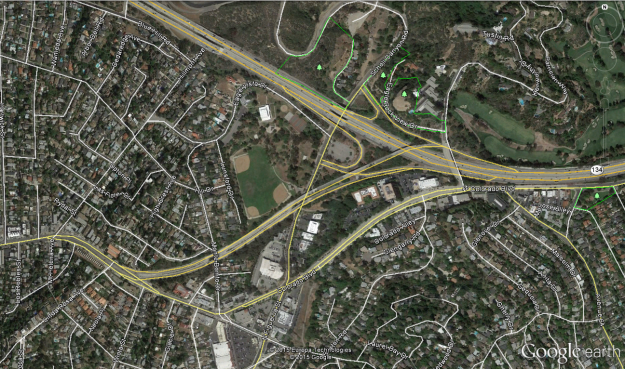 Like its companion on the 2, this interchange provides very limited function for traffic circulation. Traffic exiting the 134 westbound could exit at Figueroa, the same off-ramp with a terminus a little over a half mile away; traffic entering the 134 eastbound could simply continue on Colorado, turn left on Figueroa, and use the Figueroa on-ramp. According to our friends at Caltrans, the ramp volumes are pretty unimpressive. Assuming all the traffic from the Colorado ramps went to Figueroa instead, the combined ramps would certainly be the most heavily-travelled ramps between the 2 and the 210, but still well less-used than the 134 ramps in downtown Glendale.

This is a large area, so rather than detail a development concept, let’s just look at how much space we’d have to work with in general terms. The following table shows the freeway parcel areas (according to ZIMAS), and the number of housing units that could be developed on each at R3 (classic dingbat) and R4 (small podium) zoning density.

Of course, it’s probably not practical to develop the entire area as residential buildings; we are talking about 10 acres of land after all. Some roadways for circulation would be needed, and a little open space wouldn’t be bad despite the proximity of some other parks. Still, you could reserve 40% of the space for other uses and produce about 650 units of housing at R4 density, all without demolishing any existing buildings. R4 is probably not an unfair assumption, as some nearby commercial zones are C4, which allows R4 uses.

In addition to bureaucratic challenges, you’d have to get rid of the existing pavement and utilities, which shouldn’t be a huge deal. The ramps are elevated, which means you’d probably have a large amount of earth to move, but there’s an old saying in civil engineering that earthworks are cheap, and there’s always someone looking for good fill. While it wouldn’t help freeway operations, this project would take six bridges off of the Caltrans roster, and they can’t be the newest bridges around, so maybe there’s some long-term maintenance savings there.

All in all, it seems like a possibility at least worth exploring in more detail.

1 thought on “Freeway Ramp Removal – the 134 at Colorado”