Now that blog headquarters is in Glendale, it’s time to reboot the ‘Round Palms department to take a closer look at housing and development patterns in the Jewel City. There will be some more detailed posts coming up, but for now, an appetizer: this four-pack of dingbats located on Chester St just south of the 134 freeway.

These four buildings are all built from the same plan, with two being mirror images of the other two. This lends some variability to the view from the street but also creates a pleasing symmetry. The southernmost building fronts on Doran St as well as Chester St. 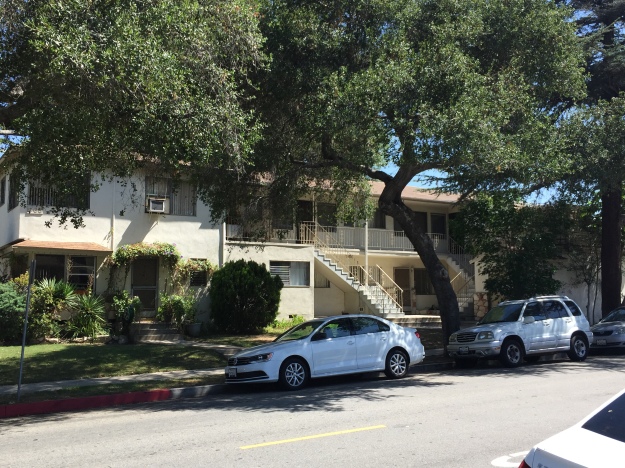 The matching staircases, one rotated at 90 degrees to the other, is a nice touch. Here’s the skinny end of the next building north, fronting on Chester St only.

The next building north is a carbon copy of the southernmost building. Note that while these buildings started the same, over time they’ve acquired some individuality. While the first building has original construction and the second hasn’t even managed to lose its window bars, this one has managed to acquire some new windows.

As any dingbat resident can tell you, that’s a major improvement: the original construction featured drafty, rattling, leaky single-pane windows that do almost nothing to stop the transmission of sound. The denizens of this building are enjoying better climate control and more respite from the sounds of the street and the nearby freeway.

By using mirror images of the plan, the designers created a little open space between the second and third buildings, pleasant enough to support a few large trees and children’s swing.

It’s perhaps a little surprising that the architect didn’t flip all four buildings, creating two courtyards, but apparently they wanted to have the open side of the southernmost and northernmost buildings fronting the street.

The northernmost building, fronting on Pioneer Dr, appears to have received the most love through the years, receiving not only new windows, but fresher paint and, if you look closely, some reinforcement for the railings on its exterior walkways

In addition to providing some courtyard space, a nice feature of these buildings is that, unlike most dingbats, the parking is not featured front and center, but rather tucked around the back off of a small alley.

This appears to have been accomplished by assembling several lots and adding an alley where none existed before. If you go back and look at the first image, you’ll note that these buildings are oriented perpendicular to all the other lots on Doran and Pioneer. These lots are about 50’ wide and 115’ deep, and the dingbat quartet was constructed on six lots put together. Putting the parking in back, off-street, is a nice design feature that improves the final result. As we’ll see in future posts, this seems to be more common in Glendale apartment buildings from the 1960s boom than in places like Palms.