If you’re a politician, a big fancy consultant, or a global thought leader, what to do you do when you visit a major city in another part of the world? You probably fly into Shiny New Airy Spaces International Airport, hop on the Global Thought Leader High-Speed Rail Line, and head downtown where you visit a bunch of places with high-end amenities and architectural showpieces like stadiums and convention centers.

Then you come home, pass through an old, congested airport terminal, and stand on the curb breathing exhaust while you wait for a car service to pick you up, since very few US airports have high quality rail connections.

Any wonder that US politicians and global thought leaders are obsessed with airport transit and convention centers?

The problem is that as an international traveler, the way you experience a city’s transit system is very different from the way that ordinary people experience it. Most people riding transit aren’t going to the airport or convention center or stadium very often (unless they work there). The vast majority of transit riders are trying to go about some mundane daily business – going to work, school, or shopping – in the places that the system serves.

So, what should you do if you want to experience a city the way residents do? Easy, just get out a rail map, pick a random stop, get off there, and start walking around. If I have time and the system isn’t too expansive, I like to try to pick one midline stop and one suburban terminal. (In theory, this works just as well – if not better – with buses, but it’s often harder to figure out the frequently and span of service for bus routes on an unfamiliar system.)

You want me to just pick a random stop that I don’t know anything about? Yes. In fact, this really doesn’t work in a city you know, since you probably have preconceived notions about the neighborhoods around most of the transit stops. The goal is to learn things you wouldn’t learn in a structured exploration.

What if I pick a boring neighborhood with nothing to do? Even better; you’re learning about a part of the city that the tourist bureau doesn’t want to show you.

What if I don’t speak the language? Even better! Now you’re experiencing a city the way recent immigrants might.

What if I pick a dangerous neighborhood? This is a potential concern. In general, many Americans (especially a certain generation that rhymes with Maybe Doomers) overestimate the level of danger in cities. Go during the day when it’s light out, and just act naturally.

What if I get lost? You have a smartphone, don’t you? Before you head out, scroll around the neighborhood in your maps app to load a bunch of data into the cache (phone memory) so that you can see where you are even without cell service. Also, there seems to be a lot more free WiFi in some countries, and you can almost always find a local restaurant or coffee shop that has WiFi nowadays.

If the stop spacing on the rail network is reasonable – like say, a mile or so – you can plan to walk between two stations, which helps give you a feel for what the city is like a little further from a transit node.

Okay, enough introduction. Here’s what I saw when I had a free day in Seoul, and a random jab at the map led me to Naebang.

Seoul is a very dense city, so no matter where you go, you’re going to see some urban environments. I exited Naebang and headed east on Seocho-daero. (Note: streets in Seoul are often just numbered sequentially with a local neighborhood name, which can be a little confusing.)

Heading uphill, there’s this Flatiron-esque building on a triangular lot.

This street is actually pretty wide an auto-oriented, like many modern arterials in Seoul. Neighborhood streets are a different story, as we’ll see later.

Seocho-daero leads you uphill and dead-ends; look back and you’ll be rewarded with some views. Urbanization in Asia is far more advanced than anywhere in the US outside Manhattan. 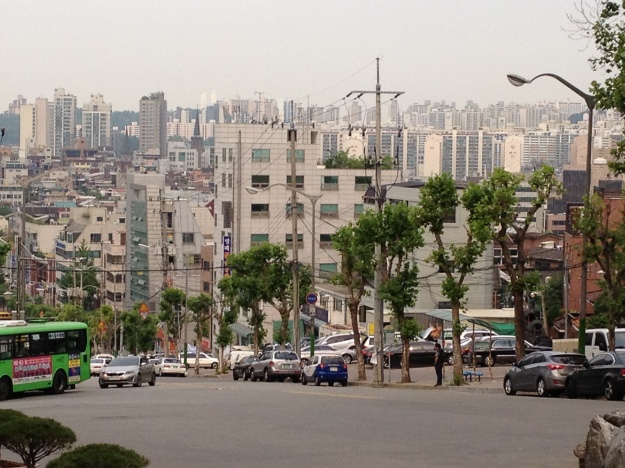 In the distance, you can see some green hills. Seoul’s dense urban environment is frequently broken up by hills, many of which form nice neighborhood parks. In a way it’s a little like. . .  Los Angeles. Is Seoul a glimpse of a future denser LA? A thought for another time.

Turning around, it’s time to head up into Seoripul Park.

There are some nice, graded paths, but why not scramble up some rocks when you can? 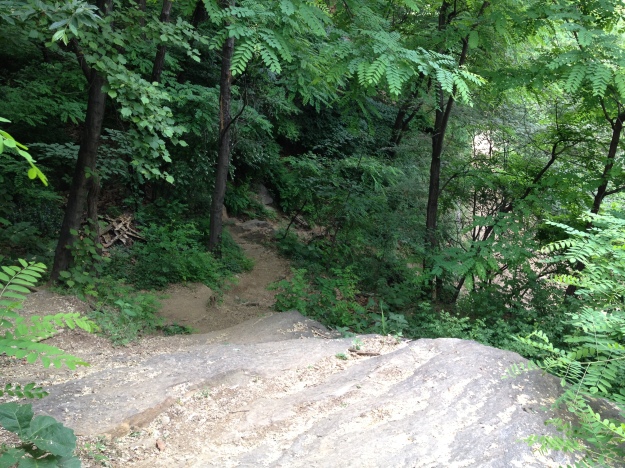 Just a little ways up, I reconnected with the main path through the park.

Seoul is dry in the winter, but has a summer monsoon that dumps a lot of rain. That keeps things very green in the hills. 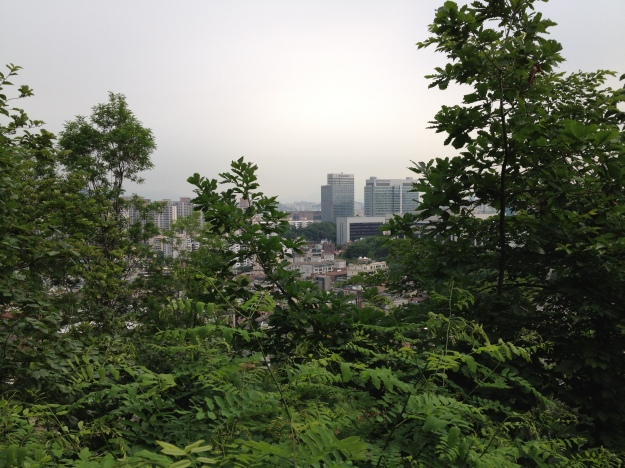 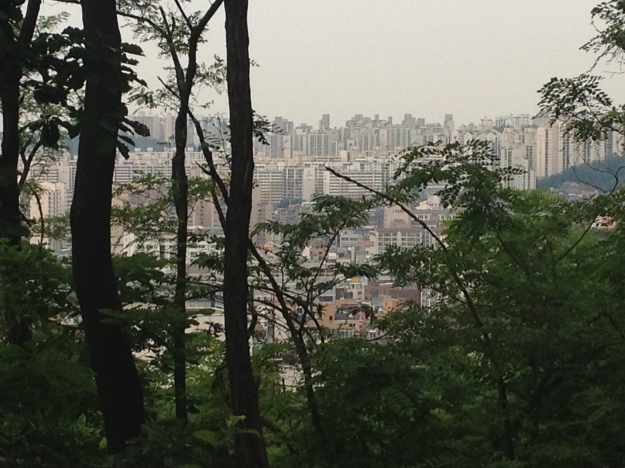 Alright, now we’re back out into some steep streets fronting up onto the hills. I like the merciless use of overhead power distribution. Also, it does snow in Seoul in the winter, pretty regularly. Next time I go, I want to go in winter and see how people navigate those hills in snow.

Off of the arterials, you can see part of how Seoul achieves such density – really narrow side streets. 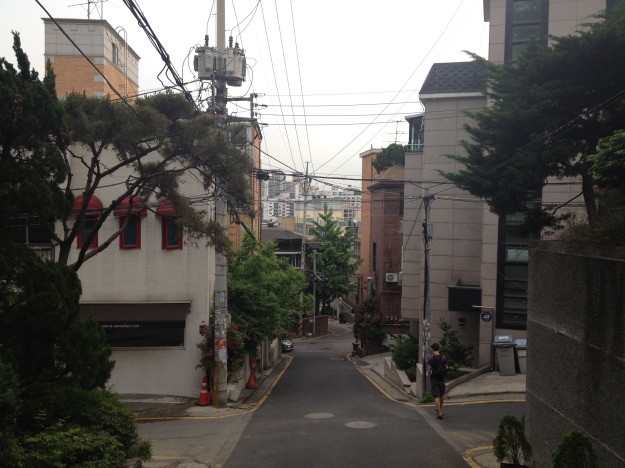 Of course, all those towers help too. 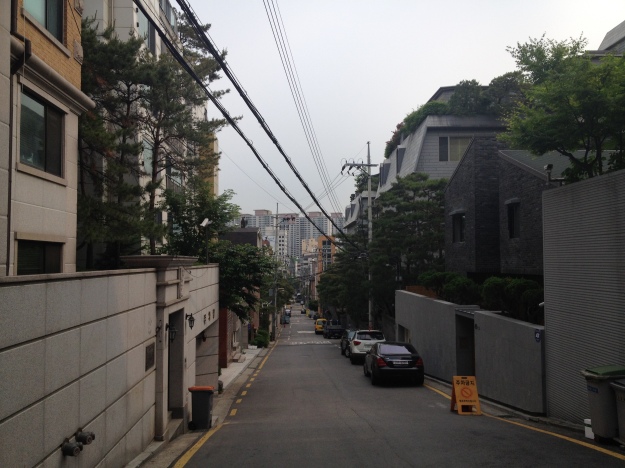 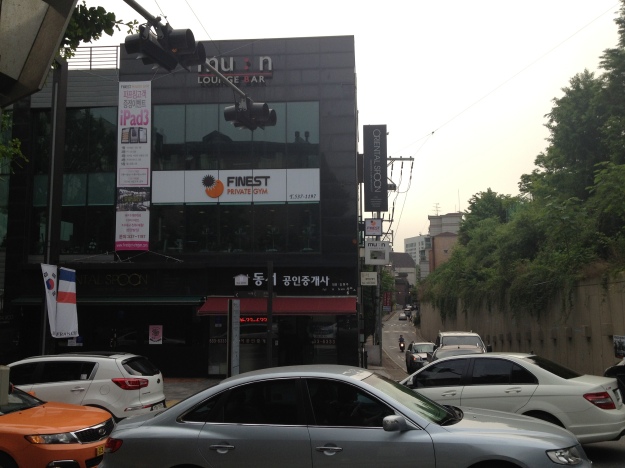 And hey, I was able to find where this is in Google Maps!

I kept wrapping around the hill on the street, into a neighborhood that looked a little more upscale. Nice sidewalks!

The building on the left was completed after Google street view’s last pass.

Seoul – not scared of funky design. 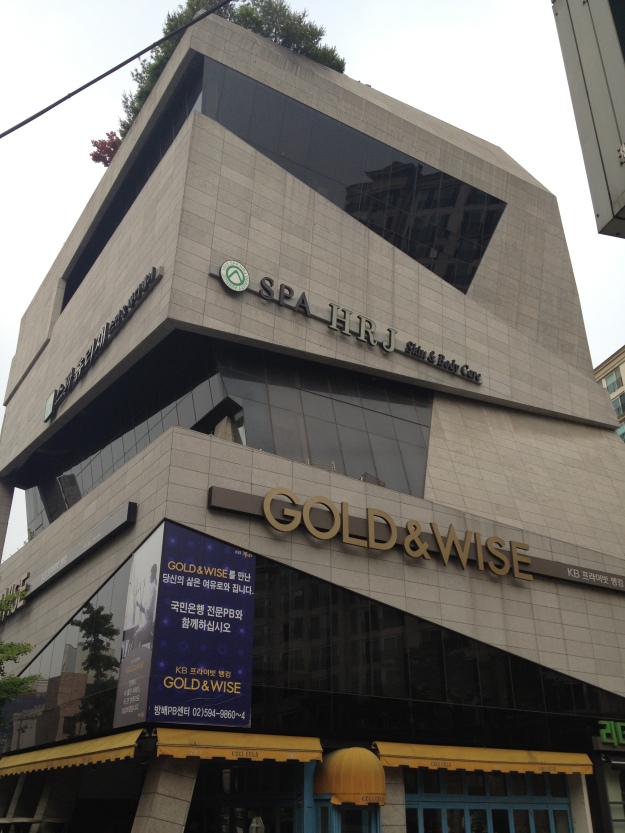 Oh, and one more thing: all those mid-rises in the upscale neighborhood? They’re all podiums with parking on the ground floor. Ha!