LA needs a housing boom. Not just in downtown or Hollywood or Santa Monica, but everywhere. From Reseda to Harbor Gateway, Palms to Fontana, Bellflower to Mar Vista. It can’t be just a few enormous projects; we need thousands and thousands of small projects all of the region. To paraphrase Mao, let a thousand dingbats bloom, let a thousand accessory dwelling units contend.

In that spirit, here’s four housing types already found all over LA that are good to go. All we gotta do is let them do their thing.

We sort of have to start here, don’t we? The dingbat is probably the definitive LA apartment type. Reviled by architecture critics and urbanists for their style, doubted by structural engineers for their seismic stability, lived in by hundreds of thousands for their undeniable functionality and cost effectiveness. 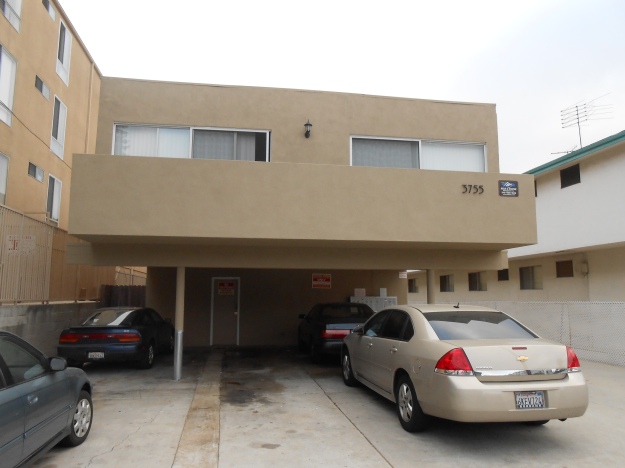 On the style count, well, everyone can’t be as beautiful as Andres Duany. If you care about architecture, worry about making sure that architectural variety and experimentation aren’t being sacrificed at the altar of neighborhood character. Most of us can’t afford Hermès, but we’ll happily take Forever XXI.

On the seismic count, the problem with dingbats is the open nature of the first level caused by parking bays. (In engineering parlance, it’s a soft story because it has much less shear strength than the solid-wall apartments above.) This can be fixed pretty easily by (1) reducing parking requirements and eliminating the problem in the first place and (2) engineering better connections between the steel supports and the wood above. It’s a trivial problem – really.

Where should they be built? Just about anywhere in LA County. In the City of LA, the sweet spot for dingbats is probably neighborhoods that are currently zoned for minimal multiple-family (RD or R2) where dingbats could probably be built under R3 or R4.

Regardless of the zoning code’s approval or lack thereof, accessory dwelling units and attached apartments abound across the city. It’s a win-win-win: the region gets a bunch of apartments supervised by someone who’s bound to really give a crap about the impact of their tenants (i.e. an on-site owner), owners get some bonus income from renting the units, and renters get, you know, a place to call their own. 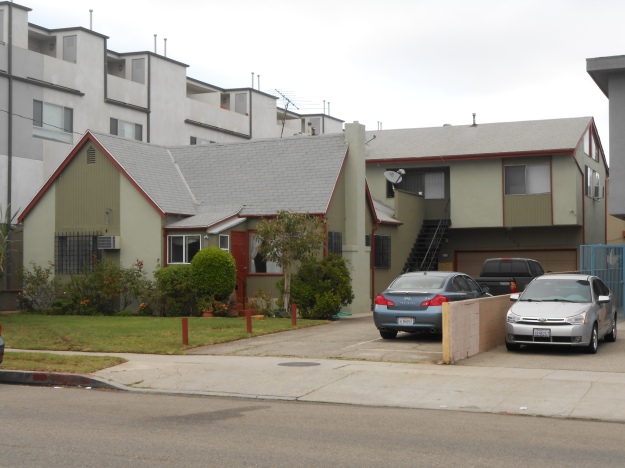 You see these here and there in places like Palms and Torrance, sometimes even purpose-built as SFRs with apartments in back. In a few places, like Hawthorne, you see them all over the place. It’s a really natural addition to neighborhoods.

Where should they be built? Any single-family neighborhood that hasn’t seen an increase in supply in about 50 years. In the City of LA, this is everything R1 and below.

Way back at the turn of the last century, LA was seeing a large number of immigrants from the Midwest, looking for better weather and better work. Michael Cudahy enticed a bunch of them to buy long, skinny lots (50’-100’ wide by 600’-800’ long) in his eponymous city, with the idea being that you could build a house and have a huge back yard for a garden or orchard.

As the population of LA County boomed, these lots were redeveloped into apartment complexes that are sort of like the megafauna of railroad flats.

The resulting urban form looks like low-rise suburbia, but creates surprisingly high densities: Cudahy is the second-densest city in California (after Maywood).

In addition to their namesake city, Cudahy lot redevelopments can be found in places like El Monte. Historically, these redevelopments have been mostly 1-2 story low-rise, but there should be no harm in letting them go to 3-4 stories and do apartments.

Where should they be built? Any place that has the requisite lot type. This includes Sylmar, Avocado Heights, Fontana, several parts of San Bernardino, Jurupa Valley, parts of the Antelope Valley, and the remaining lots in Cudahy and El Monte.

You know podiums – they’re those mid-rises with up to 7 stories of wood-frame construction sitting on top of a story or two of concrete base. The height limitations are due to seismic code and fire code requirements, which in LA essentially mandate steel and concrete construction for anything over 75’ tall. 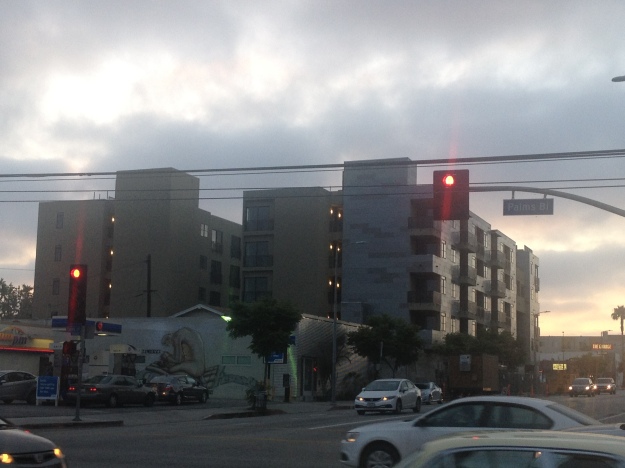 Podiums often draw a lot of architectural criticism (first law of affordable housing – the more reviled it is, the better the job it’s doing at being affordable, right down to the ultimate rural affordable housing, the universally despised trailer park). As I’ve said before, this blog isn’t in the business of worrying about architecture. Podiums are great as a building form, and like any, they can be executed well or not so well.

In the scheme of housing, podiums are the last gasp of cost-effective wood-frame construction before you’re forced to incur the costs of steel and concrete frames. The first three options in this post can be constructed for around $60-$100 per square foot. With podiums, cost rise up to around $200/SF, so they’ll always be more expensive to build. The trade-off is usually taking a smaller unit, and perhaps being able to save on transportation. Of course, after the building capital costs have been paid off and the units start to filter, rents can fall in older buildings.

High-rises cost considerably more, around $400-$500/SF, which is why affordable housing solutions that depend on them are a bad idea when there’s enough room for the four cheaper options presented here. High-rises still play an important role, though, because they satisfy luxury demand and prevent it from bidding up prices for low-rise and mid-rise construction. That’s why we should allow construction of (unsubsidized) market-rate high-rises.

Fortunately, LA is a huge region, and we have plenty of space to grow. We can build all the housing we need without needing high-rises for a long, long time.

Where should they be built? Anywhere on the Westside, much of Southbay, parts of the Valley, the San Gabriel Valley, San Bernardino, and Riverside.

So, if we could build 100,000 housing units per year for the next 10 years, we’d be getting back on track. That may seem like a daunting task, but if you break it down, I think it’s achievable. Maybe it looks something like this, every year:

Aren’t these numbers a little audacious? Not really. This boils down to building 27 SFRs and 55 ADUs per day, along with about 10 dingbats, 1 podium, and 1 Cudahy lot redevelopment. This amount of construction might be a little jarring at first, just because we’ve adjusted to a slow growth level of construction. But technically, it’s trivial – does anyone really think it’s hard to find the capital, materials, and labor to build one podium per day? These targets are the equivalent of building about 275 housing units per day.

Realistically, you probably wouldn’t even have to hit those targets, because market-rate high-rises, non-profit developers, and institutional builders (like universities) will also be building units.

As with any product, the way you reduce costs is by standardizing the plans and the procedures for putting them together. In some future posts, we’ll take a look at how that can be done in the case of these housing types.