Way overdue for another look at land development patterns in Palms. As we’ve seen before, Palms isn’t just dingbats – there’s a healthy proportion of newer buildings along with some original single-family houses. Busier streets like Motor, Clarington, and Palms Boulevard itself have transitioned to apartment houses almost entirely. However, today’s tour takes us down Hannum Drive, a quiet side street that runs for just one block between Hughes and Feris, and still has a cluster of SFRs.

Hannum starts at Hughes, across the street from this construction site, which was SFRs as recently as last fall, when I did my tour of Hughes.

The south side of Hannum starts out in typical Palms style, with two small 6-unit apartment buildings (1963 on the right, 1973 on the left).

Same story on the north side, with three small apartment buildings (a 1954 6-unit building just out of frame to the left, a 1963 fourplex, and a 5-unit building of unknown).

And then, just like that, you’re in SFR heaven the rest of the way to Faris. Here’s the south side, with a string of seven SFRs all dating to 1925-1926.

The blue one even has a sizable yard made out of a vacant lot (I’m inferring same ownership by same last date sold). 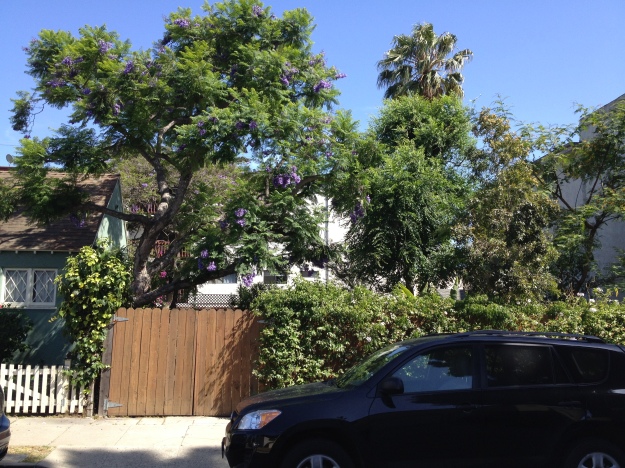 Here’s another shot of the north side. The apartments in the background are on Faris and date to the 1980s. 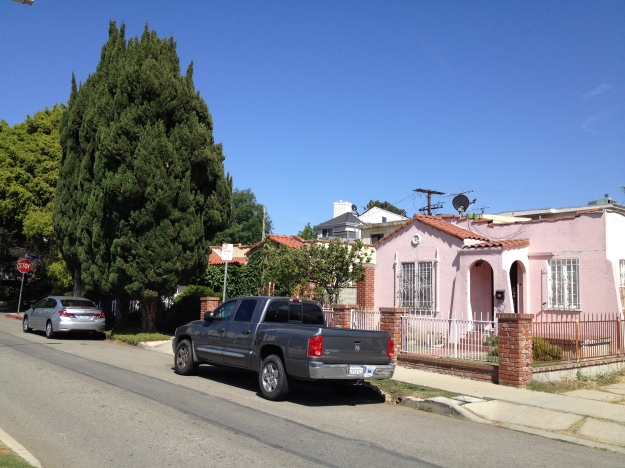 A parting shot back up towards Hughes

Now, you might wonder if this little cluster of SFRs is protected by R1 zoning. Nope, it’s all R3.

This is how neighborhoods grow when you let them. This group of single-family homes is thriving, despite over six decades of apartment construction in Palms. No one is being forced to give up their home. There’s no “incompatible” development – new apartment buildings pop up every now and then, and everything works fine together.

This is also how neighborhoods grow when you don’t abuse eminent domain to assemble full blocks of property for redevelopment. Go back to the top and check out the new apartment building under construction on Hughes. It abuts a solitary SFR. You think the apartment developers didn’t try to buy that lot too? They probably did, but the SFR owners decided they didn’t want to sell. The result is that sometimes a new building is put up on several parcels assembled together, sometimes on two parcels, and sometimes just a single parcel, like a classic dingbat. This produces a variety of building sizes, structure heights, street frontages, and architecture that you just don’t get when you redevelop an entire block. Nobody would ever plan to put one SFR by itself on Hughes; it just happened.

Next time you’re around Palms, pay attention to this. It’s a great, positive example of how single-family houses and apartment buildings of different sizes and ages can coexist – the perfect antidote to whatever you’re hearing from your local NIMBYs.