About a month or so back, Market Urbanism posted some information on office rents and vacancies. I noted that El Segundo was renting for about the same price as downtown LA, and joked that we should upzone El Segundo.

Except, I wasn’t really joking. There’s about 2 square miles of El Segundo just begging to be upzoned. The area bounded by Imperial, Sepulveda, Rosecrans, and Aviation is ripe for upzoning. In my post on Sepulveda/LAX transit, I offered the following suggestion for the El Segundo area: 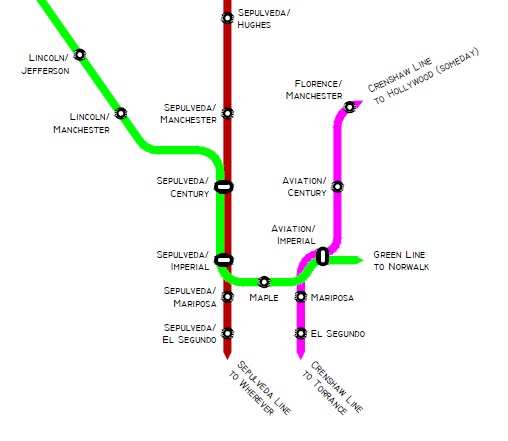 An even better option would cross the Sepulveda Line and Crenshaw Line south of El Segundo Blvd, so that all three lines in the area would have a direct transfer to each other. Note that the graphic has been redrawn to be a little more geographically accurate: 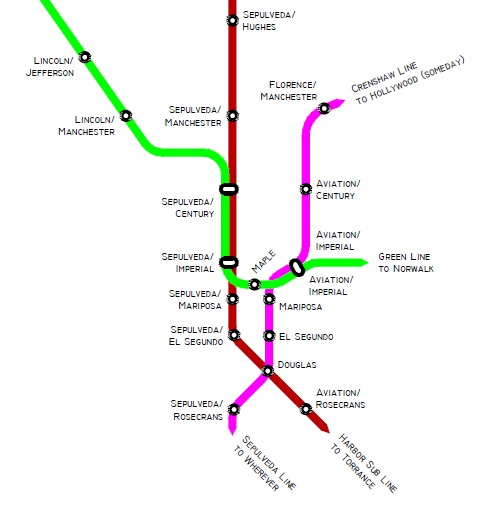 That’s really got too many stations, but many of them already exist, and the stations that are located ideally for transfers (on the arterial grid) don’t necessarily provide good interior access to the area. Nevertheless, 10 stations in 2 square miles is just ridiculous. Maple can be eliminated, and Sepulveda/Mariposa and Sepulveda/El Segundo can be combined into one station at Sepulveda/Grand. El Segundo is the natural arterial for high quality bus service, but if you look at the city west of Sepulveda, there’s no problem routing a future high quality bus line on Grand west of Nash. 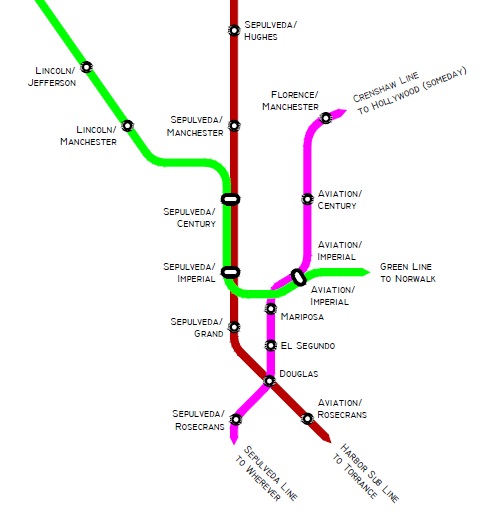 That reduces it to 8 stations. We could reduce it to 7 stations by rerouting the Sepulveda Line to run with the Crenshaw Line from Mariposa to Douglas. This would have some minor impact to speeds on the Sepulveda Line and worsen access to the city west of Sepulveda Blvd.

Personally I like option 2 the best, but the specifics can be ironed out later.

Three LRT lines, direct access to the 405 and the 105, a short ride to LAX, close to the beach… what else could you possibly want? And just look at all the space that could be built up.

But best of all, that part of El Segundo has what is perhaps the most crucial feature of any upzoning plan: the people who will allegedly suffer have no say in local politics, because they happen to be in a different jurisdiction.

As an analogy, consider Marina del Rey, which is a small unincorporated enclave of LA County surrounded by the City of LA. If Marina del Rey were part of the City of LA, people in Venice would be complaining to the normally excellent Mike Bonin, and he’d be trying to stop the development. But all of the development there is approved by the county, and four of the five county supervisors, representing 8 million people, don’t have to worry about the local NIMBYs.

Back to El Segundo. The perceived impacts of upzoning the area bounded by Imperial, Sepulveda, Rosecrans, and Aviation would all be to the north, east, and south – in places outside El Segundo, populated by people who can’t vote for El Segundo city council members. So there you go, El Segundo City Council. Rezone the whole thing for mixed use, smaller setbacks, and higher FAR, and let’s go.