In the US, we often mentally organize cities by their freeways, and consequently we often conceptualize potential transit as mimicking the freeway network. Hence we think of north-south transit between the Westside and the Valley as “the 405 Line”.

But as Cap’n Transit would remind us, transit is competing with parallel facilities like freeways. If the freeway is a total basket case, like the 405, you’ll probably do fine. But in a place like Orange County, even the heavily traveled freeways are going to offer faster average speeds. Where transit and freeways compete, freeways often come out on top, partly because medium distance trips are the sweet spot for freeways – trips that are long enough to make freeway access time worth it because of the higher speeds freeways offer.

However, transit is also in competition with arterial roadways, mostly for trips for which freeways can’t compete. These are shorter distance trips, where it’s not worth the time to get to and from the freeway, as well as medium distance trips where there’s no freeway available. In fact, even in LA County, the best performing LRT lines are the ones that are not directly in competition with a freeway: the Blue Line is somewhere between the 110 and the 710, and Expo Line Phase 1 is about a mile from the 10 (and benefits from the truly abominable traffic). Meanwhile, the lines that directly compete with a freeway (the Green Line and the 105, the Gold Line and the 110) achieve fewer boardings per mile.

It follows that we could find some clever and unexpectedly successful LRT or BRT routes by looking for long, straight arterial corridors that are serving short distance trips and medium distance trips where there’s no freeway available. In fact, we already saw a couple such potential routes when we looked at Sepulveda Pass/LAX transit: Reseda, Balboa, and Lincoln are long arterial corridors where there’s no practical competing freeway.

Where else do we have potential corridors like this? Here’s a few that come to mind: 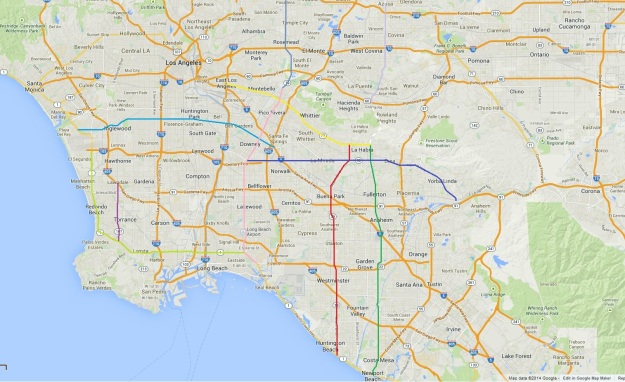 At the moment, I’m finding the first two the most intriguing. The others are good candidates for sure, but I like the idea of a sneaker route in Orange County, connecting the beaches to Metrolink. Beach is a good five miles from any competing north-south freeway. Harbor probably has better destinations but is closer to the 55 and the 57.

The problem to watch out for with routes like this is making sure there’s enough development to justify the route. Odds are the biggest destinations have freeways between them, but you can still find routes that make sense. I may revisit one or several of these corridors in more detail in the future.

4 thoughts on “Compete With Arterials, Not Just Freeways”