I’ve written before about my neighborhood’s namesake boulevard, but the development on Palms is almost all residential. The “main streets” of Palms are really Motor and Overland. So today, let’s take a tour of Motor Av.

A word must be said at the outset: the architecture on Motor Av is not going to inspire many people. James Howard Kunstler isn’t going to write anything romantic about its earnest ornamentation reflecting the city’s work ethic or how the repetition of a pattern in the street room delights the eye. Whatevs, streetscapes are relatively easy to improve. The real thing to be watching here is diversity of use (residential, offices, retail, light industry, restaurants) and the wide range of building ages (everything over the last 100 years).

So if you find yourself getting caught up in the architecture, remember: you’re looking at a hard working neighborhood main street, that’s getting it done in just about every way. It’s within walking distance for pretty much everyone in the neighborhood. If, on the whole, you’re not happy with Motor Av, your primary concern isn’t diverse mixed-use neighborhoods. There’s nothing wrong with that, but part of understanding what your strategies should be is understanding what your goals are. A denser, more walkable LA is going to have more streets that function, and probably look, like Motor.

Oh, and one more thing: notice that between the Google Street View shots (2011) and my photos (2014), Motor has been converted from four lanes to three lanes with bike lanes! Alright, off we go.

Starting just north of Venice, on the west side of the street, here’s a cleaners, an antique shop, a random building, and the post office.

Across the street, here’s the neighborhood bike shop (in a 1923 building), a small apartment house (built 1931), and an office building (1989). Need a small affordable office for your business? Palms has you covered. 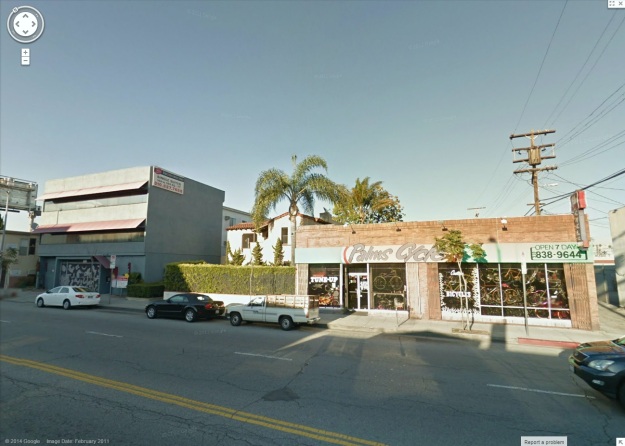 Meanwhile on the west side, a newish (2004) more upscale apartment building.

And all of that is just the first block!

Continuing north, we have a small office building (1991) and a mid-size apartment building (1971) on the west side.

And across from that, a larger apartment building (1987). 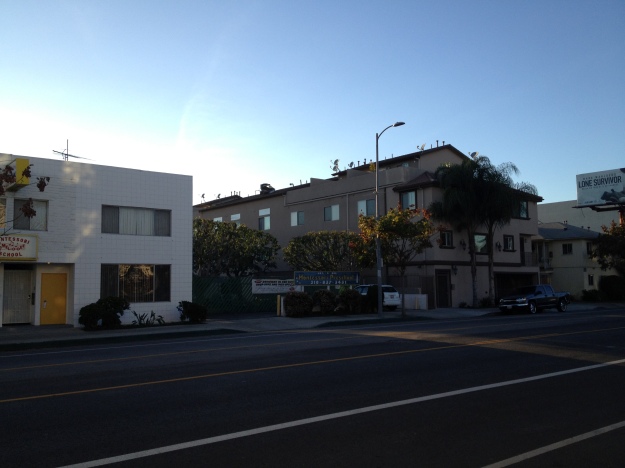 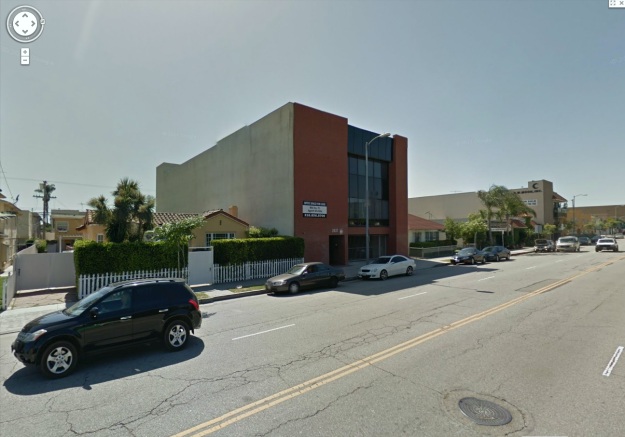 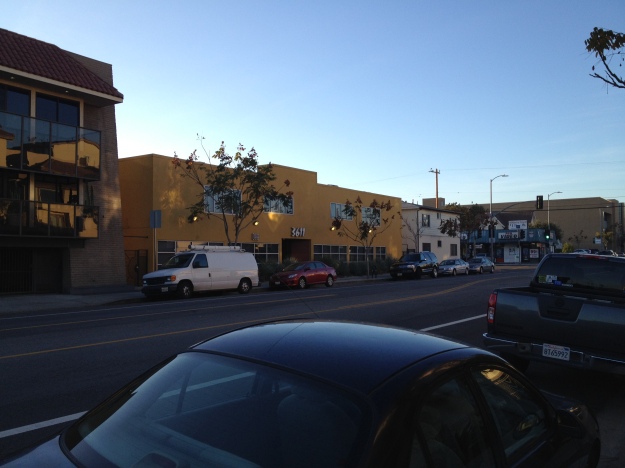 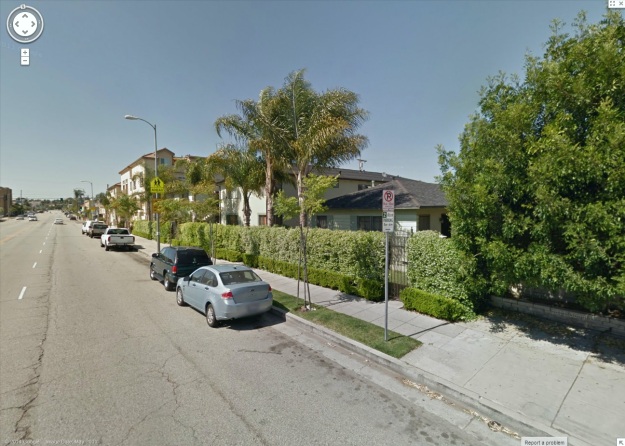 Across Tabor, we have a couple convenience stores and Laundromat; right side dates to 1923, while the left side strip mall is 1960.

Almost the whole east side is occupied by Palms Elementary School.

Crossing Palms Blvd, there’s an Arco gas station (cheapest gas around as long as you can deal with their bizarre ATM card machines) on the west side, and Palms’ newest mixed-use building (2013) on the east side. Some of the retail space on the first floor has been occupied by The Wilde Thistle. . . welcome to Palms, y’all!

Back on the west side, there’s the who-knows-what light manufacturing building (1950), yet another SFR (1916), an under-construction four-story apartment building (2014?), and an auto repair shop (1940s). Houston, eat your heart out. 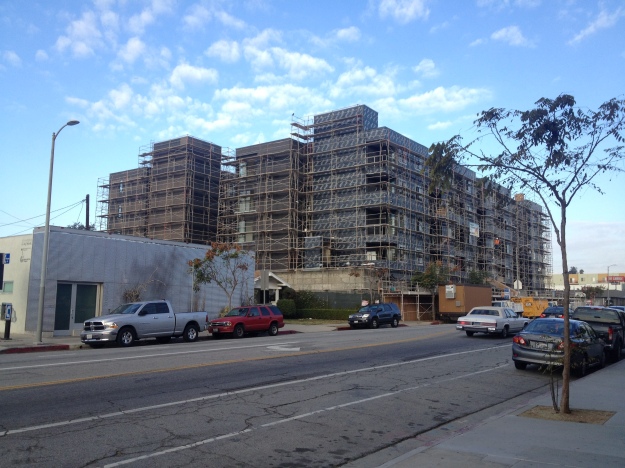 The east side has some more 1980s office buildings, a physical therapy building, and some “store & residential combination” buildings from various decades. The corner office building is 1997.

Across from that, The Garage, a solid neighborhood bar in a 1961 building, and some office buildings all over the place (30s-80s). A four-story apartment building (1988) and old-school mixed-user (1924) take us up to National. 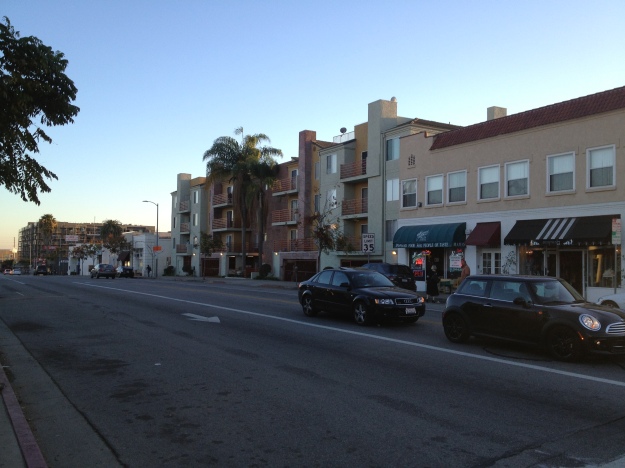 The east side has a liquor store and more genuine urban industry! 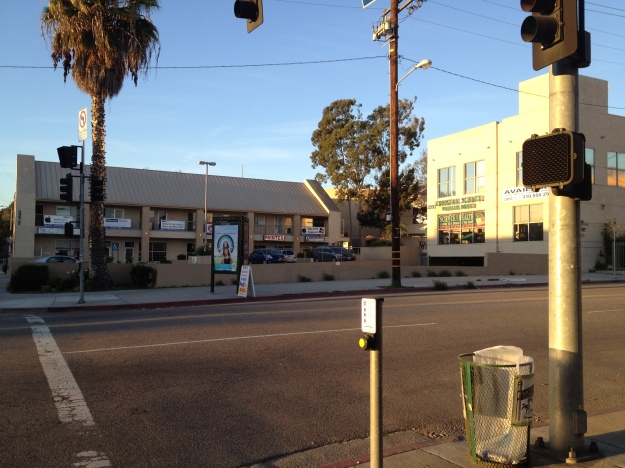 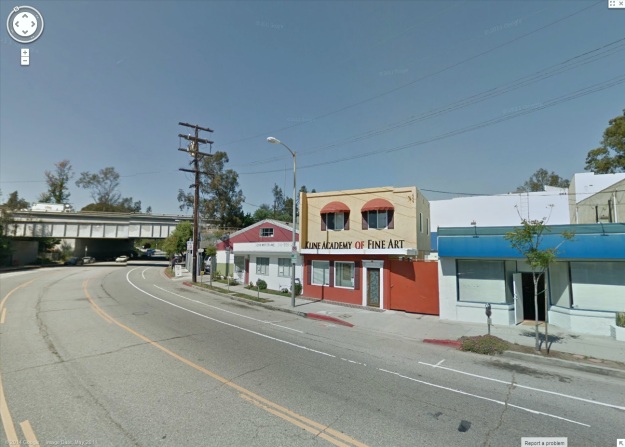 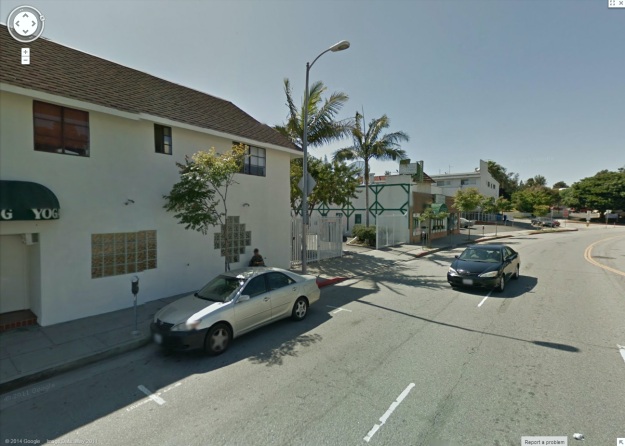 Of course, Motor keeps going north past the 10, but I hear that’s the kind of neighborhood where they’re scared of bike lanes and worry about the spacing of poles holding up netting at a driving range. Nice architectural uniformity, but nothing interesting to see there.

2 thoughts on “The Heart of Palms-ness: Motor Av”