There’s a rezoning effort underway in Los Angeles, branded as recode:LA, that’s going to rewrite the city’s entire zoning regulation. This is a huge opportunity to make it easier to build in LA, restoring affordability and capitalizing on infrastructure investments. I’m planning to get involved and start attending meetings, and I encourage everyone interested in seeing LA flourish to do the same.

Where Are We Today?

First, a quick summary of where we are. Typically in LA, the arterials on the grid are zoned for commercial uses, and the area between the arterials is zoned for residential. For example, here’s the general zoning for Palms and Cheviot Hills. 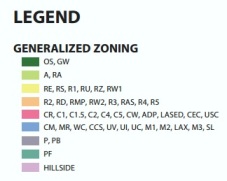 There’s also RAS3 and RAS4, which are basically R3 and R4 with ground-level retail permitted, and slightly less restrictive setbacks.

Where Do We Want to Go?

Now, before we start rezoning, we have to ask ourselves what we’re trying to do here. What goals are we trying to achieve? What do we hope LA will become?

For me, as I have said before, my main goals are affordability and opportunity. I want LA to be a place where low-income people can afford a roof over their heads, and where all people have the opportunity to pursue their goals in education, starting a business, etc. In my mind, that should be LA’s raison d’etre. Better infrastructure, including transit, is not a goal unto itself, but a means of achieving those two cardinal goals. Achieving these two goals would help address many other social concerns. Other benefits that might flow out of that, such as reduced per capita energy use, would be nice, but they’re not my main concern.

Part of my project here is to try to convince you that affordability and opportunity are the two best goals for improving LA. But obviously, not everyone is going to share my goals, and that’s ok. I don’t expect people in Rolling Hills or Calabasas to give a rat’s ass about affordability in their cities, because that’s not the reason those cities exist. The important thing is to recognize and be honest about your goals. If you say you’re in favor of affordability but also want to protect SFRs, you’re lying about one of them.

Back to the zoning.

How Do We Get There?

If I had my way, we’d just let people build however many apartments they want wherever they want. The collective knowledge of the market is almost certain to be better than anything planners could devise, not because planners are no good but because of the inherent complexity of the system. It would be like trying to do an analysis to figure out how many trees there should be in the forest and where they should grow.

It’s easy to sit around, say “upzone everything”, and then hit the bar and start pounding beers, but that’s ultimately an academic exercise. Any proposal to just upzone everything is probably dead in the water. It’s much harder to come up with a plausible plan that has a chance of being implemented. So here’s my attempt at a plan that I hope could win some public support. As with everything here, consider this a starting point; comments and suggestions for improvement are encouraged.

So, here’s the basic idea. The following rules would apply to areas currently zoned R1 through R5:

When it comes to the large lot zones – A, RA, RE – I would propose allowing them to be subdivided per current R1 zoning standards. After 15 years, the subdivided lots could be developed according to the above standards. But really, A/RA/RE are a small component of the plan. The major benefit is the above rules applied to zones R1 through R5.

In neighborhoods where these rules would result in buildings up to 75’ – the maximum for Type 3 construction – being automatically permitted, the neighborhood council and city could begin to consider allowing high-rises. I’m mostly ignoring high-rises in this proposal, because we don’t need a single high-rise in LA to make the city more affordable and welcome many more future Angelenos to our city.

Parking would be handled like Donald Shoup says it should.

How Does This Work?

Perhaps the best way to explain this concept would be by example. Take an existing R1-zoned neighborhood. In the first year, up to 4% of properties could get permits to be redeveloped into 3-story 6-unit apartment buildings – assuming, of course, that 4% of owners want to redevelop their property, and they don’t get outbid for the permits by opponents. Replacing 1 out of every 25 SFRs with a 3-story duplex where every floor is an apartment isn’t going to change the character of the neighborhood much. Under this plan, it would take at least 25 years for all structures to be replaced – a low rate of change.

Again, this proposal is just a starting point. I’d expect a healthy debate about the percentage of lots that can be redeveloped every year, the number of units allowed, and the percentile trigger that permits another story. We could also define a few different zones with different rates and triggers, some more permissive and some less permissive.

I will also note again that this is not necessarily my preferred solution; I’d rather leave more up to market forces. But this is a proposal that can hopefully accommodate a significant amount of new development to improve affordability, spread out the development so that no one area is overwhelmed, and still provide property owners with the certainty they desire.

So, what do you think? Is this a viable proposal? And what would make it better?