In a previous post, I provided some setup for studying the area between 2nd and Union Station. In this post, let’s look at the 101. In another post, I set some ground rules for improving urban freeways, the main gist being that freeway projects and urban improvement are not necessarily mutually exclusive goals. So let’s see those principles in use on the 101.

There’s a lot of attention focused on the area between Union Station and 2nd St lately, and why not? With the development boom downtown, the popularity of Little Tokyo, Grand Park, and transit improvements all over the place, there’s a lot to be excited about. Slicing through the area, first west by north, then northwest, is the iconic 101 freeway – symbol of LA freeways, of LA traffic, of LA growth and sprawl, of LA in general. The Four-Level Interchange even appears on book covers and postcards.

The 101 is the prototypical 1950s freeway, showing the lessons that highway engineers learned from their first attempts. The 101 wasn’t even in the same class as freeways like the 110 north of downtown, which was (and is) a disaster of sharp curves and contorted 5 mph ramps. However, the 101 shows typical 1950s flaws, the biggest being interchanges that are too close together. Engineers eventually figured that out too – check out the 210 between the 57 and the 15 for example.

The 101 between the San Bernardino Split and the Four-Level (i.e. from the 10 to the 110) is one of the most congested freeways in the city. I’m writing this at about 10:30pm and I just opened Google Maps and – yep – it’s yellow. It’s also a considerable barrier between Union Station and downtown. So it’s the perfect place to demonstrate these principles. Let’s run through an option for making things better here, from south to north.

This ramp should be repurposed into an exit from the 101 north to Chavez and an entrance from Chavez to the 10 east. The utility of this interchange will become apparent shortly. Concurrently, the slip ramps to and from Kearney St should be eliminated, removing freeway traffic from local streets in Boyle Heights.  These ramps would also give traffic coming east on Chavez an entrance to the 10 east without going through Boyle Heights.

The ramp from the 10 west, to the 10 east, and to the 101 south are relatively benign, so they should be left alone. The ramps from the 101 south to Mission and from Mission to the 101 north are theoretically too close to interchanges to the north. However, they should also be retained, since they provide access to and from industry on the east bank of the river without sending traffic through Boyle Heights. (Issues on the 101 between the 10 and the East LA Interchange will be addressed in a separate post.) Considering the congestion on the 101 north here, you’d be a fool to get on at Mission anyway, and I don’t think many people do so.

I like to call this style of interchange a “kiss interchange” since the ramp termini look like puckered lips in plan view, making it look like the freeway is kissing the other road. Since they’re cheap to build, these are plunked down all over the place on 50s-era freeways. The ramps at Vignes and Garey are all much too close to the preceding and following interchanges, and they’re redundant anyway, so they should all go. Northbound traffic would get off at the new Chavez ramp I mentioned above or at Alameda; southbound traffic would get off at Los Angeles. Traffic entering northbound should enter further north; traffic entering southbound should enter at Los Angeles or from Mission.

The ramp from the 101 south to Los Angeles should be retained and reconfigured to also provide access to Aliso eastbound. Access to Los Angeles northbound is not critical because there is a left from Aliso to Alameda northbound. This allows this ramp to serve the functions of the eliminated Garey St offramp. 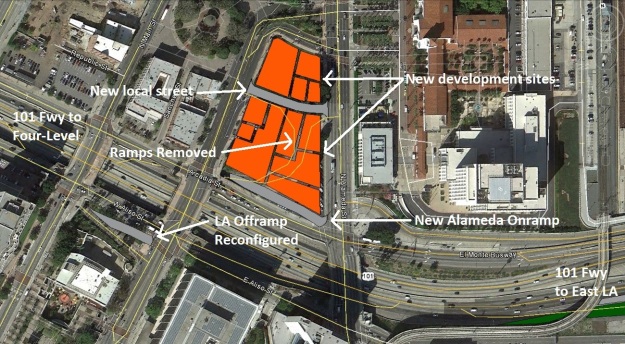 The ramp from the 101 south to Broadway is way too close to the onramp from the Four-Level. It should be eliminated and replaced by an extension of Aliso north to Grand and improvements further north. Due to the crazy grade changes in this area, it’s not possible to have the extension of Aliso intersect Hill – it’s too high up.

The ramps from the 101 north to Spring and from Broadway to the 101 north take up an entire city block, have terrible geometry, and are too close to adjacent interchanges. These ramps? Gone. Arcadia should then be extended north to Grand. Again, the grade differences make it impossible for the extension of Arcadia to intersect Hill.

It would be nice to turn the loop ramp from the 101 north to Grand into a slip ramp on the south side of Grand, but the severity of the topography in that area would push the ramp too far south, close to the Alameda onramp. Instead, the ramp should duck under the onramps  and in a slightly larger loop and terminate at Grand where the onramps currently start. The onramps to the 101 north should be moved to the west and square up with the extension of Arcadia. I considered sending the offramp to turn right onto Bunker Hill and come out at the intersection with Chavez, but that would add a ton of traffic turning right from Bunker Hill to Chavez and then Chavez to Grand, so I nixed that. I also thought about sending this ramp to the left under the 101 to come out at the intersection of Hope and Temple, where the ramp from the 101 south currently ends, but I don’t think that grading would work.

Another option would be to get rid of the fork of the onramp from Grand that goes to the Four-Level and just let that traffic use Figueroa to the 110. The offramp to Temple and Hope from the Four-Level ramp could be eliminated too, and replaced by a better configuration of the offramp from the 110 south to Figueroa. However, I decided against this option because the ramp from Figueroa to the 110 north and from the 110 south to Figueroa should probably be eliminated as part of rationalizing the ramps on the 110 (more on that another time).

I’m a little gunshy about going after the Four-Level. After all, it’s basically where freeway engineering was born – the  first high-speed semi-direct interchange ever. But LA ain’t a museum, just ask the people in Beverly Hills buying $10m teardowns. Nostalgia is for chumps. The Four-Level was fully opened in 1953, before the 10 and the 5 were complete. At that time, it was necessary to provide all the movements. But at this point all four movements to the 101 south and from the 101 north may be redundant.

I started looking at options for eliminating and reconfiguring ramps at the Four-Level, but you know what? Any changes to the Four-Level are only about eliminating short weaving distances and redundant ramps on the 101 and the 110. They’re not about improving the streets downtown for pedestrians or cyclists, and they’re not about reducing ROW footprints and opening up land for redevelopment. Now, maybe it’s worth doing some improvements at the Four-Level, but they’re a separate issue from what I’m trying to get with this series of posts, which is better connections from the Union Station area to downtown. So let’s leave the Four-Level alone for the time being.

This is, of course, just one option, and there are plenty of other ways you could configure things. Come up with your own, and let’s get to work on convincing the city and Caltrans to do an analysis.

Now We Have Real Estate to Work With

The land vacated by these ramps should be redeveloped. And instead of doing the normal deal where we have a design competition, give the developer unreasonable subsidies, and end up with vacant lots for years, how ‘bout this: zone the land for any residential or commercial use (and industrial for the piece on Commercial St), no parking minimums, no tax abatements or subsidies, no FAR/height limits, no nothing. We just auction it off to the highest bidder with two conditions: no surface parking, and you gotta build something there within 5 years. We should also break up some of the larger blocks into a few different parcels and auction them off separately. You want to buy the whole block, ok, but you have to win the bid for each piece.  It’ll be a fun experiment.

This project really is an all-around win. It opens up new land for urban development, which unlike any of the proposed parks in the area, actually helps connect Union Station and downtown. It fixes dangerous conditions on the freeway that waste capacity. It makes things better for pedestrians and bikes by getting rid of loop ramps and improving the street grid. And the ROW sale would help fund the project. What’s not to like?

Note: you used to be able to import Google Earth images and topographic data into AutoCAD, which was pretty sweet, because you could draw real engineering stuff and then export it back to Google Earth. As part of Google’s continuing campaign to make its products worse, this feature is no longer available. This leaves several crappy options for trying to share this kind of work:

Therefore, for now, I’ve gone for the fast route with questionable accuracy – drawing Google Earth polygons. I’m going to try to update this using SketchUp to verify the geometry and give others the ability to edit, but I’m not making any promises.

Contact me if you want the Google Earth shape files.

At Kenny Easwaran’s suggestion, here is an image of the whole corridor. Click to enlarge. Again, apologies for the low quality, but Google Earth and MS Paint is the fastest way to get it done.